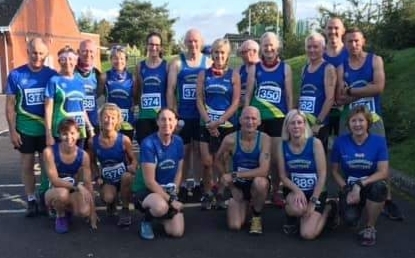 The next round of the Club Championship took place at The Minster Challenge near Axeminster. Axe Valley Runners were the race organisers, with 3 races on offer. Race distances at 12k, 5k & a 1k fun run gave runners of all abilities an opportunity to race.

The 12k race was the race which counted towards the Championship points. This was the last race in the East Devon Community Race Series. Twenty one Trotters made the trip East in search of valuable points!

The route took the runners across farmland, over open fields, as well as the aptly named Evil Lane. Due to the rain of late, the runners had to endure patches of mud around the course. The start and finish was situated at the Axe Valley Academy.

Roger Easterbrook ran a cracking race to finish on the podium in 2nd place. Rogers’s time was 00:50:22 and he also won the MV45 age category award.

Mandy Wheeler, yet again put in a fine performance, to finish 2nd female and win the FV45 age category prize.

There were some fine performances amongst the Club runners, with prizes galore! The role of honour included age category winner Jacki Woon (FV50). Eleanor Taylor was runner up in the FV60 category and Lance Mason, Ruth Johnson & Paul Sharples all finished 3rd in their respective age categories. Well done to you all. 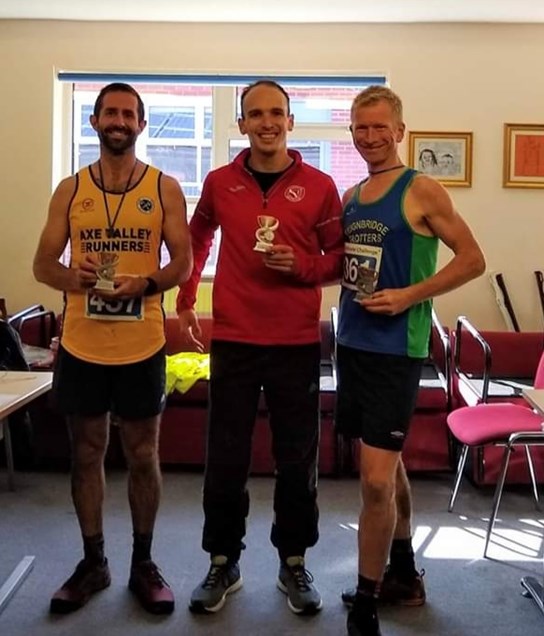 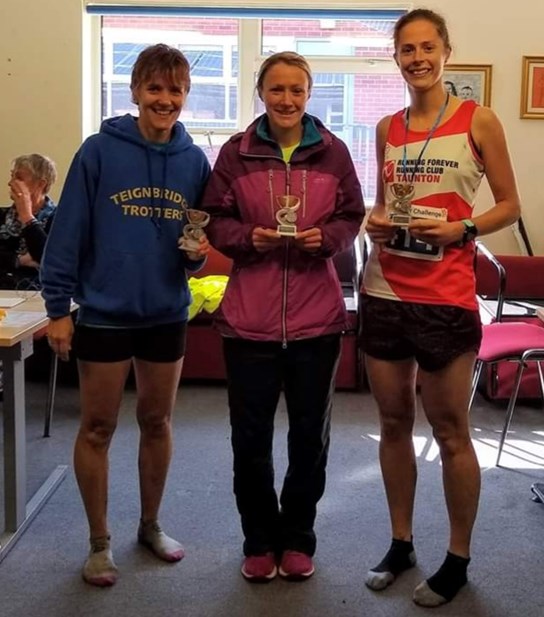 The Cardiff Half Marathon also took place on Sunday. Jamie Barnett, Nigel Barnett and Daniel Graves took their chance in the predominantly flat and fast course.

The race started outside Cardiff Castle before the runners passed the Cardiff City Stadium on the way to Penarth.

Taking in the glorious Penarth Marina, the field then crossed the barrage, heading to Cardiff Bay. The runners ran right through the heart of the bay taking in the Norwegian Church and Wales Millennium Centre.

The course then headed towards the north of the city, where the runners completed a loop of the beautiful Roath Park Lake, before the grandstand finish in the heart of the city at the Civic Centre.

Weather conditions were perfect at race time for the record number of entrants, all 27,500!

Jamie Barnett started with the elite athletes, and ran a superb race. Jamie finished in 46th position, clocking a great time of 1:12:55. 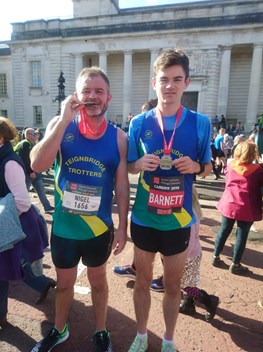 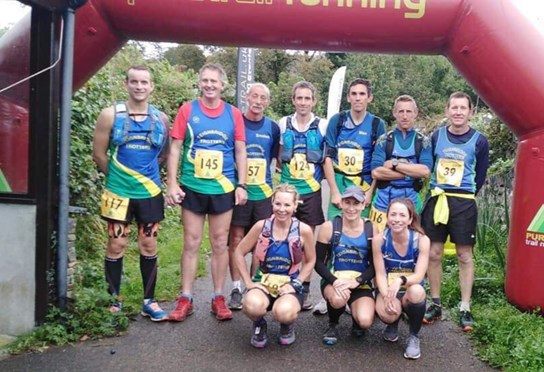 3 in One Club runners looking apprehensive before the fun begins!!

On Saturday 5th October, Five Trotters took part in Puretrails, Dartmoor 3-in-1, a race that was cancelled last year due to the bad weather.

Starting and finishing in the Moorland village of Peter Tavy and nestled below the wild Tors of West Dartmoor, this event offered 3 races over 3 distances, all in ONE day. Runners who completed all three races covered 22.5 miles in total.

All races started and finished at Peter Tavy Village Hall with a mass start for each race. The rules meant that you had to finish the first race to be on the start line for the second. It was down to the individual to decide when & how much time they required to recover between races.

Ten Trotters took part in the event, of which nine completed all three races!

Start times were generous to a degree, but the cumulative effect of 3 race starts in 5 hours certainly had an effect on performance. It was a long race broken into 3 faster, shorter events. It was a real test of endurance and tenacity.

All 3 routes were fully marked and marshalled and a bespoke medal was be waiting for the finishers of all 3 races during the day. 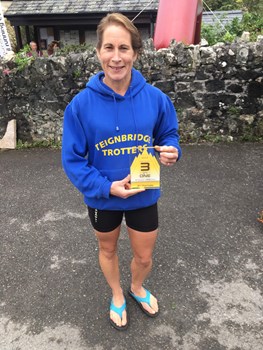 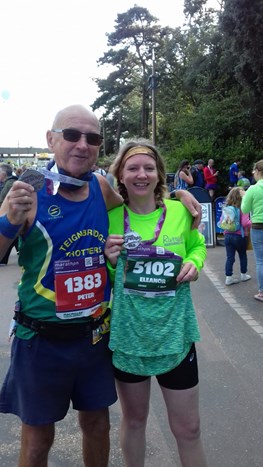 Peter and his daughter celebrate their 40th and 70th birthdays

Trotter Pete Kirby was delighted to run with his daughter Eleanor, for her first marathon in Bournemouth on Sunday 6th October. It was Pete's 46th marathon.

On a warm, windy & sunny day, they crossed the line together in 5hrs 15mins having promised to complete a marathon to celebrate their recent 70th & 40th birthdays. Eleanor who runs with Riverside Striders in Gloucester insists it's her first & last marathon. Yes, we've all heard that one before!"

The Marathon route was a spectacular point – point route taking the runners alongside the world famous Loch Ness. The organisers bussed all the competitors to the start. The start was set in moorland on the high ground between Fort Augustus and Foyers, before heading out through the stunning Highland scenery along the south-eastern shores to the northern tip of the Loch. From Dores, the runners followed the River Ness as they headed back towards the finish in Bught Park Inverness, the capital of the Highlands.

Weather conditions were very poor, and due to the barren landscape, there was no shelter. Some organised runners take old, warm clothing with them, and then discard them at start time. Unbelievably though, the rain abated and the wind became less of a factor as the runners headed downwards.

The course contained a few hills, but this only gave spectacular views of Loch Ness. This year’s race set a record for the number of entrants, with around 3500 entrants.

There was pasta and soup for all the finishers, which was very welcome.

Graydon led our quartet of Trotters home, clocking a time of 3:51:52, despite picking up a hip niggle at six miles in!

Teresa Holmes also ran a fine race to claim her Baxter’s soup in a great time of 5:34:40. 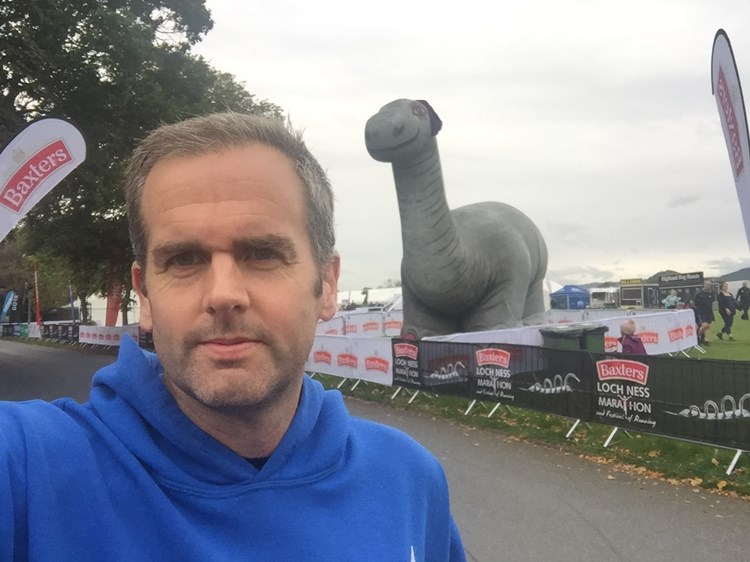 Graydon finds a mate in The Highlands!

Plymouth Britain's Ocean City 10k was held on Sunday October 6th. The course was primarily flat with one hill to negotiate on Gdynia Way. The route is great for runners of all abilities. An out and back course started on Armada Way in the city centre, before taking the runners out towards Cattedown, and along the embankment towards Marsh Mills. At this point the runners turned before repeating the route back to the finish. All roads were closed for the event & the runners were treated with some great views along the way. The weather conditions were just about perfect, although slightly breezy.

Six Trotters travelled south on the A38 for this very popular and well supported race.

Max Conroy was our first Club runner home, clocking an impressive time of 00:47:05.

There were new PB’s for Emma and Scott, who are both showing some great form of late. Dominic also made his Trotters debut, and should be pleased with his first outing. 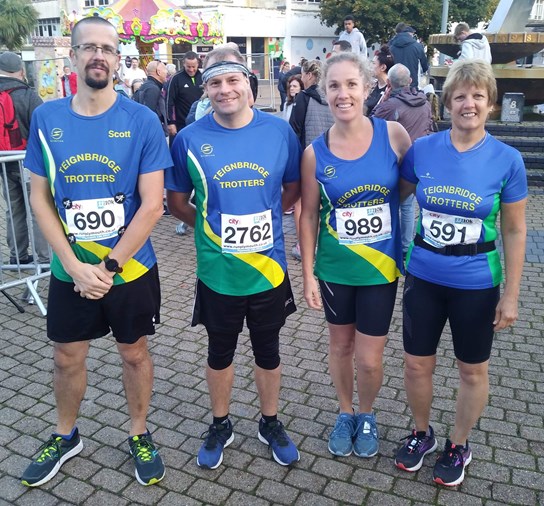 Quartet of Trotters at Plymouth 10K 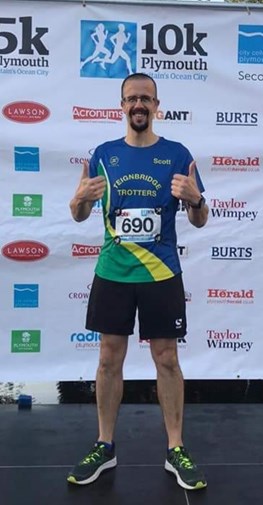 Scott gives the thumbs up after his PB

Sunday saw the opening round of the Charles Stanley Westward Cross Country at Central Park,Plymouth.

These tough series of races really do test the stamina and mental strength of the athletes. Wendy Goldthorp managed to round up six Trotters, three ladies and three lads.

This event, although run in dry conditions over head,  the 9k course was still very muddy in patches, and took a lot of getting through. All our team members performed admirably.

Well done to you all. 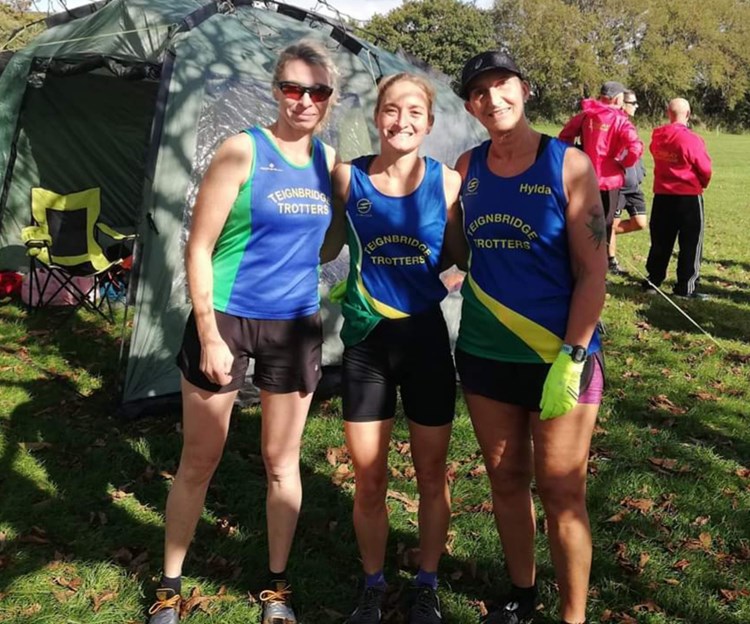 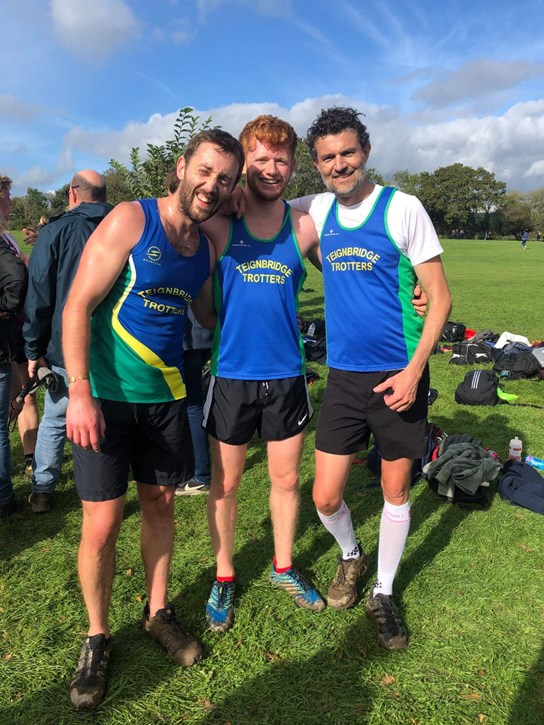 The lads at Plymouth XC with their muddy trainers on.