The Teignbridge Trotters hosted the 25th Anniversary Great West Teignbridge 10 on Sunday. Starting and finishing at Teign School in Kingsteignton, the two lap ten mile course is run on undulating roads through Sandygate but includes fast level sections on the main road past Preston Manor works.
The race was ably staffed and marshalled by numerous club members who worked tirelessly to ensure the success of the event. However, fourteen Trotters flew the flag and joined almost 250 other runners taking advantage of the almost perfect conditions.

Leading the team home in an awe inspiring 58:51 was Dave Tomlin, in 7th overall position and no doubt warming up ahead of his attempt at retaining his crown at next Sundays Taunton Marathon. In 30th position, Tom Burman was second Trotter to cross the line, with a splendid time of 1:06:03 - one minute less than his own junior club record for 10 miles!

On the other side of the Tamar, Marsha Garrard and Graham Penn were taking in the spectacular scenery offered by An Resek Hellys (The Race of Helston), now in its 8th year and organised jointly by Kerrier District Council, Carn Runners and Tri-Logic Cornwall.

The multi terrain 10 mile race included a short section of sandy beach and part of the South West Coastal path, however there was a last minute change of route for the 400 plus runners, due to a fallen tree! There was marvellous spectator support, including the airborne variety from RNAS Culdrose. Graham Penn crossed the line in 1:24:36; Marsha improving on last year's time with a very respectable 1:33:42.

Lone Trotter Chris Cleeve was meanwhile in sunny Oxfordshire competing in the Carterton 10K race. Described as mainly flat with some undulations, the event is held in association with nearby RAF Brize Norton. Chris recorded an excellent time of 38:02 and was in 12th overall position, in a field, of 220 runners.

Photo: Tom Burman, on the left, at an earlier event (Bideford Half Marathon) 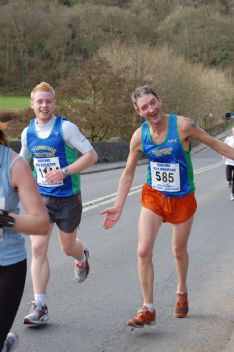