Bronze a plenty in the Garden of Eden

On Sunday, five Teignbridge Trotters travelled to Cornwall for the inaugural Eden Project Marathon and Half Marathon, organised with the assistance of the St Austell running club. The challenging multi terrain courses had been imaginatively created `to give the competitor the opportunity to witness the extraordinary scenery, both manmade and natural that the area has to offer`, with both races sharing a common start and finish area.

The event, started by Tim Smit CBE Chief Executive and co-founder of the Eden Project, saw over a thousand runners participate under leaden skies, with a steady cooling drizzle throughout.

Clare Youngman and Dave Dunn elected to run the Marathon and both came away with age category awards. Clare crossed the line in 63rd position in a field of 306 finishers, with a very respectable time of 3:50:29, 7th lady overall and 3rd FV40. Dave finished 112th in a well earned 4:04:44, to take 3rd MV55.

Also on Sunday, Graeme Baker was sampling the delights of rural Somerset and the Weston AC organised Mendip Muddle. The gruelling 20k (12.43 miles) off road event, with 420 metres of ascent was hampered by driving wind and rain, with extremely poor visibility in places. Graeme laboured through the idyllic sounding Velvet Bottom, Rhinos Rift and Rains Batch to post an admirable 2:04:23 and was 164th out of 253 finishers.

On the previous Monday evening, ten Trotters were at the Exeter Arena for Round 1 of the winter 3k series, supported by Ironbridge Runner and Puma. 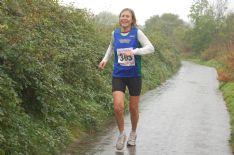 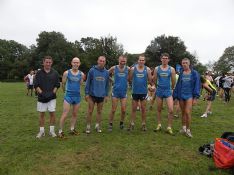 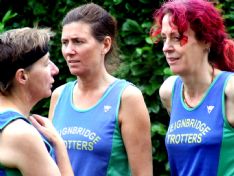