A small hardy band of Trotters attended the third `Eller 10 mile road race near Torpoint on Sunday. Organised and admirably staffed by the Torpoint & Rame Peninsula Lions club, the challenging event was blessed this year with bright and breezy conditions, unlike the two previous occasions, when torrential rain and fog hampered proceedings.

Starting and finishing at Millbrook Football Club, the undulating course took the runners out towards Cremyll, across Maker Heights to Kingsand and onto Rame Head. From here they were afforded stunning views from the cliff top road across Whitsand Bay, before returning to Millbrook via St John.

Meanwhile, Angie Weeks was recovering from her exertions of the previous day at the 27th Snowdonia Marathon. A hard earned 5:48:48 and 1278th out of 1325 finishers, resulted in the award for 2nd FV65.

Team Trotter before the start of the `Eller 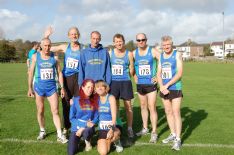