Gold for the ladies at Erme Valley

Twenty Teignbridge Trotters paid a flying visit to Ivybridge Rugby Club on Friday evening for the Erme Valley Relays and came away with 1st Prize in the FV35 category. Divided into teams of four, each participant is required to run a 2.5 mile circular route, on undulating rural roads. Hosted by the Erme Valley Harriers, this hugely popular event attracted a total of 91 teams and their supporters. Conditions were almost ideal with a cooling light breeze.

This event was however just a precursor to a varied weekend for another group of race regulars. Saturday saw Mark Wotton in the Midlands for the Birmingham Black Country Half Marathon, an event that follows the canal towpath between Wolverhampton and Birmingham. The flat course involved negotiating 25 bridges and locks with the additional challenge of the 650 yard long Coseley tunnel!

On Sunday, lone Trotter Tom Burman attended the 17th Launceston Half Marathon, organised by Kernow Runners. The `Real Beast of Cornwall` is one of the most challenging races in the South West, with a steep ascent to the town at approximately 12 miles. The weather forecast promised rain but this failed to dampen Tom`s spirits, as he romped home 91st overall out of 371 finishers, in a time of 1:41:08.

Meanwhile, Steve Rawlinson was enticed towards East Devon for the inaugural Feniton Frolic, a 6.5 mile multi terrain event across fields and along bridle paths and roads. Hosted by Honiton Running Club and attended by Olympic runner and Exeter Harriers life member Jo Pavey, who started the race in her home village at 2pm. Steve crossed the line 59th out of 106 finishers, in a time of 58:03.

Syd Willocks ventured even further afield and ran the Aberdare 10k in South Wales, a race organised by Macmillan Cancer Support. The mainly flat on road event started at Penderyn in the Brecon Beacons National Park, finishing at the Michael Sobell Sports Centre in Aberdare. Syd posted a fine time of 46:30 and was 104th out of 276 finishers.

Photo: Mark Wotton at the Birmingham Black Country Half Marathon 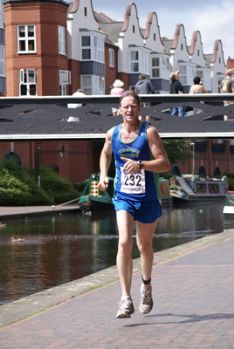