Gongs galore for the Trotters

On Sunday, the Teignbridge Trotters hosted the Newton Abbot Ladies 10k race at the Dornafield Touring Park, near Two Mile Oak, courtesy of the owner Peter Dewhirst. Most South West running clubs were represented, however the undulating circular course even attracted a runner from the Clydesdale Harriers of Glasgow! Twenty two Trotters ran the race in fine sunny conditions and came away with four individual and two team awards, in addition to a number of PB`s.

The popular event saw record entries of 320, which resulted in a donation by the club of £640 to Mr Dewhirst`s nominated Charity: Bowel Cancer UK. This figure later reached the sum of £940, after further fundraising efforts by Mr Dewhirst on the day. There were 286 finishers, which was a massive increase on the 2008 figure of 175.

First Ladies team were: Clare Youngman, Tracy Elphick and Cathy Burgess, with Gia D`Aprano, Belinda Collins and Sue Brown crowned fourth. Thanks are of course extended to all the club members who acted as marshals, timekeepers and to those staffing the water stations.

Graeme Baker had meanwhile travelled to Newcastle for the Great North Run. He was one of the BBC featured runners on the pre start build up programme, before joining 54,000 other competitors on the course to South Shields. Graeme had a good result in the hot crowded conditions and was home in 1:49:19, 5,445th overall and 17th out of 191 in the MV 65 age category. He also received pledges of over £1,000 to assist his nominated Gambian village.

In equally sunny conditions, Graham Penn was running the City of Truro Half Marathon, sponsored by Skinners Brewery and organised with the help of Truro running club. The hilly circular route starts and finishes on Lemon Quay and for the vast majority of the time, is run on quiet rural lanes. Graham battled against cramp in the closing stages of the race to post a disappointing 1:57:27 and was 255th out of 437 finishers.

A couple of events from the previous weekend illustrate the versatility of certain club members. On Saturday 12th September, Vaughan Lindsay competed in the `Accelerace Extreme Triathlon` in Teignmouth. Advertised as one of the `Ten Toughest` Tri`s in the UK, the event started with a 2k sea swim of two laps from the pier. This was followed by an 88k bike ride to the River Dart Country Park and a challenging 23k run, incorporating several Dartmoor trails. Vaughan finished 2nd out of 32 competitors, in a total time of 5:47:10 (Swim: 24th in 12:02, Bike: 3rd in 3:15:02 and Run: 2nd in 2:17:42).

On Sunday 13th September, James Henderson attended the `Torrington Back in 5`. The undulating 5 mile road race starts and finishes at the Rugby club and takes in the villages of St. Giles and High Bullen. James was 21st past the line in a field of 76, with a time of 34:19.

Lower: Pauline Newsholme at the finish. 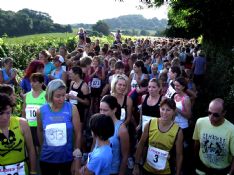 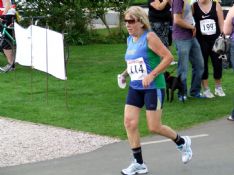