More mud and versatility for the Trotters

On Saturday, five Teignbridge Trotters attended the 5th Cockington Christmas Caper, organised by the St Barnabas Sports Trust - a Christian charitable organisation, established in 2003, with the aim of `nurturing and developing children and young people, of all abilities, in sporting skills`. The friendly and well run event usually sells out well in advance and such is its popularity, this year even attracted two ladies from the Falmouth Road Runners.

The seven mile multi terrain race starts in the grounds of Cockington Hall, with a brief section of road and this year, the 120 runners were favoured with almost ideal weather conditions. Bruce Campbell was lead Trotter from an early stage and despite treacherous mud on the off road sections, he stormed the hill to the finish at the cricket pavilion, in 23rd position, with a time of 1:12:55.

Meanwhile, lone Trotter Alan Boone had ventured north to Apedale in Staffordshire, for the 6th Newcastle Dale Dash 10k. The multi terrain event, supported by Newcastle (Staffs) AC was well marshalled and run in sunny conditions across Apedale and Lymedale, with views of Silverdale at the highest point. Conditions underfoot were however wet and muddy for the 147 competitors. Alan had a good race and crossed the line 49th in a time of 48:42. 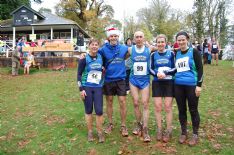 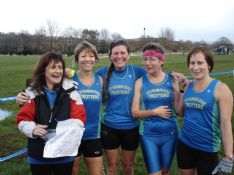