On Saturday, a Teignbridge Trotter duo began the Endurancelife `Devon Coast to Coast`, covering over 140 miles under their own steam and by various means.

Months of rigorous training for `Classic Pair` Pete Aston and Adrian Youngman led up to the two day event, which started with a 9 mile mixed terrain run from Brendon to the Foreland Point Lighthouse (most northerly point in Devon) and back. A quick transition followed and it was off on their bikes for a 55 mile ride through the Exmoor National Park and thence to Okehampton and the Meldon Reservoir.

Stage 3 of the event was a particularly gruelling out and back trail and mountain run of 4 miles to the summit of High Willhays, at 1100 ft, the highest peak in southern England. Stage 4 involved a 23 mile bike ride through the Dartmoor National Park towards Lydford Gorge and their final destination for the day: Princetown, where pitching the tent in the dark, added a new meaning to the word challenge!

Day two began with a 23 mile ride over moorland and along bridleways and lanes to Totnes, where the pair changed to a completely different mode of transport. Stage 6 was an 8 mile paddle in a kayak along the picturesque River Dart to Dartmouth, where the final and most testing stage awaited them.

Stage 7 was undoubtedly a case of saving the best until the end, with a 19 mile mixed terrain run via Start Bay and Slapton Sands, to the finish at East Prawle, near Kingsbridge. Pete and Adrian finished 26th out of 28 teams, in a combined time of 1,319 minutes 29 seconds.

In an otherwise quiet weekend for the Teignbridge Trotters, a mere five club members tackled the 23rd Taunton 10k race on Sunday. The ever popular event starts and finishes at the Blackbrook Pavilion with the course heading out of the town on quiet country roads through the villages of Stoke St Mary and Haydon.

The Royal Blues were running well and despite the hot weather, the whole team finished in very respectable times. First Trotter home was James Henderson, crossing the line 61st in a field of 603 finishers, with a time of 41:42. He was quickly followed by Howard Cotton, 70th in 42:08 and Gary Watson 77th and 42:28.

Club stalwart Syd Willocks was however star of the show, as he ran away with the 1st MV60 award in a very commendable time of 47:33. Michelle Willocks-Watts completed a most successful line up with her 48:49.

On the previous weekend, Daryl Milford, after an epic train journey across Europe was running the Berlin Marathon. Conditions were far from ideal for the 40,000 runners from all parts of the globe: hot and humid with no breeze. This was Daryl`s second Marathon and he was determined to beat his time from the Paris event in April, where he posted a time of 4:13. He was therefore overjoyed to finish in a superb time of 3:37:08, with his ultimate goal of sub 3:30 in sight.

Lower: Daryl Milford at the Brandenburg Gate, after completing the 2009 Berlin Marathon. 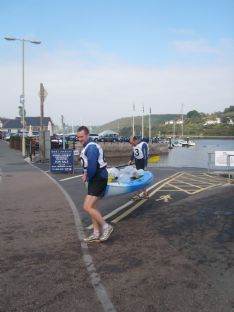 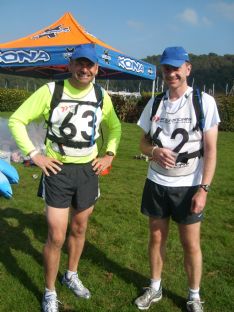 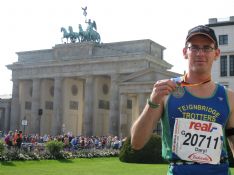