Twelve Teignbridge Trotters headed to Blackheath on Sunday for the 29th Flora London Marathon. This huge event, one of the most popular in the UK racing calendar, was the brainchild of Roger Bannister pace man and Olympic champion Chris Brasher, back in 1979.

The London Marathon has grown in size from 6,255 finishers at its inauguration in 1981, to 34,497 in 2008, many running in support of a variety of worthy causes. One such individual was Trotter Rod Payne, who raised the sum of £1,700 for PHABkids, a charity dedicated to "promote and encourage people with and without physical disabilities to come together on equal terms, to achieve complete integration within the wider community and to make more of life together". Rod, who last ran the race fifteen years ago, achieved a time of 4:34:20.

The grim weather forecast proved to be misleading, as there was glorious sunshine throughout. The heat however did not deter Ian Langler, first Trotter across the line in the Mall, in a very respectable time of 3:12:42. John Tweedie was close behind in 3:15:50.

Meanwhile, in North Devon, three Trotters were battling through National Trust mud at the Arlington Court Canter. Normally a 10k event, this year it was extended to coincide with its 13th anniversary and billed as `unlucky for some`. Luck paid no part in it for Hippo veteran Jimmy Donovan who crossed the line 76th out of 230 runners, in a superb time of 1:02:09. 10k regulars Marion Witham and Julie Crump clocked 1:27:58 and 1:37:29 respectively.

Further afield, the intrepid Andy Penney ran the Goyt Valley 10k trail race, on the evening of 22nd April. This hilly multi terrain event at Errwood in the Derbyshire Peak District had a field of 174 runners and saw the Royal Blue singleton arrive in 35th position, with an excellent time of 45:39. The sum of £720 was raised during the event for Buxton Mountain Rescue. 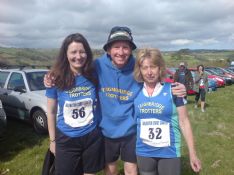