Another busy weekend for the Teignbridge Trotters started on Saturday with five entries at the Jurassic Coast 10k in Budleigh Salterton. Now in its 4th year and with a record amount of runners, the event supports the `Force` cancer charity. In almost perfect conditions, the 253 competitors faced a series of quite challenging hills and cliff paths on the scenic route, before the fast level finish along a winding footpath.

Syd Willocks running with number 118, but sensibly attired in a `Force` singlet and without black wig and false moustache, took the lead from the start. However, in a mad scramble for the line, Syd, Graham Penn and three other runners finished en mass in 76th position, with a provisional time of 50:10.

The previous Saturday saw cross country stalwarts Roger Hales and Jim Donovan tackling the Sticklepath Horseshoe Fell run near Okehampton. The 9.6 mile course involved 1,700 feet of ascent over high moorland and rough unmarked terrain and required self navigation. Roger crossed the finish line 13th in a field of 61 runners, with an excellent time of 1:30:10 and Jim was 34th in 1:43:11.

On Sunday evening twenty Trotters took up the challenge of the Torbay Royal Regatta 10k and scooped five age category prizes on the way. Organised jointly by Torbay AC and Torbay Triathlon club, the race starts at the Pavilion near Torquay Harbour. The mainly level course is similar to that of the Torbay Half Marathon, including the two laps of Paignton Green, before a return to the finish on Corbyn Head. 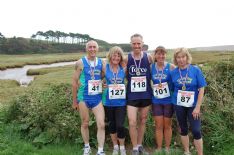