Storming finish for Steve at Sidmouth

It has been a busy and varied few days for the Teignbridge Trotters, starting last Tuesday evening with the third round of the Exeter 5k series. Syd Willocks and daughter Michelle Willocks-Watts joined 57 other competitors and both put in sound performances. Syd, who was 2nd M65 crossed the line 44th in 23:04 and Michelle (2nd F35) ran her best 5k race, 47th in a time of 23:49.

On Saturday evening, five Trotters were tempted by the now well established Cornwood 10K Challenge in South Dartmoor. The event which takes in the villages of Cornwood and Lutton, is sponsored by Satellite Sports of Ivybridge and includes some tracks and fields, but is mainly on road.

The Sidmouth Festival 10k race on Sunday also attracted a small band of Trotters, including Jim Donovan, still apparently fresh after his exertions of the previous day. The popular race, being run for the 8th time, is sponsored by Michelmores and staffed by members of Sidmouth running club.

The tough course starts on a rising gradient in Cliff Fields, near Connaught Gardens and continues to climb for almost a kilometre. The open heath land and woodland trails were very muddy, due to the recent persistent rain. After a promising start, lead Trotter Adrian Bailey was unfortunately forced to withdraw, after twisting his ankle in the rutted ground, only 2k into the race.

The sprint finish by Steve Rawlinson, seconds ahead of two other competitors, got the crowds cheering as he stormed down the hill with such a look of determination on his face. His reward: 1:02:11 compared to 1:06:18 in 2008! Stephen Wallace arrived in equally fine style in a time of 1:03:37. 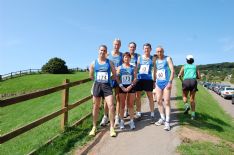 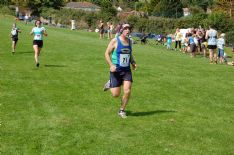