The Toddle was no doddle...

The race was started by running legend Bruce Tulloh, famed for breaking, in 1969, the record for running the 3,000 miles from Los Angeles to New York in 65 days, thereby reducing the previous record by 8 days.

Conditions for the race were almost ideal with a light drizzle to cool the 89 runners, as they headed off towards the Teign Valley road. Ronnie Jones led the Trotters and the rest of the field, as he romped home to win the race in a magnificent 1:02:02, with Dave Tomlin as 2nd Trotter, crossing the line 4th overall, in 1:03:25.

The 3rd member of the squad to finish was a recent addition to the fold: Wavell Vigers, running his first race with the Trotters, finished in 11th position with an impressive 1:08:46.

Meanwhile, a further splash of Royal Blue was to be seen in South Devon, at the inaugural Churston Flyer, the replacement race for the Brixham 10k. Billed by the organisers, South Devon AC as `a fast, flat five-mile run through quiet country lanes`, the event started and finished at Churston Ferrers Grammar School.

Further west, another trio were flying the flag at the Newquay 10k, admirably hosted by Newquay Road Runners. James Henderson had a good race in the wet but warm conditions and crossed the line 105th out of 517 finishers, in a time of 42:16. Graeme Baker posted a creditable 47:55, to gain 3rd MV65. Angela Weeks was 2nd FV65 in a time of 1:08:10, with congratulations due for creating a new club FV65 10k record.

Upper: The team at Christow before the start of the Teign Valley Toddle. 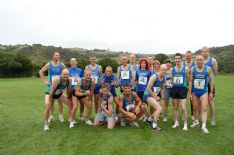 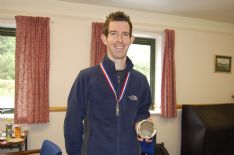 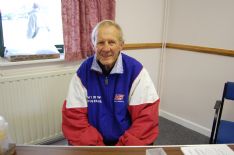