Tommo beasts himself round Templer 10

The Teignbridge Trotters hosted their annual Templer 10 on Sunday. Starting and finishing at the Passage House Hotel in Kingsteignton, the 9.7 mile multi terrain course incorporates part of Stover Country Park, the Templer Way and Hackney Marshes. The ever popular race is sponsored by the Hotel and Ironbridge Runner, and this year attracted 207 competitors, an increase of one on the 2008 figure.

Gales and heavy rain overnight failed to dampen spirits and the turnout, included regular support from the Tamar Trotters of Saltash, who fielded 21 runners and Clevedon AC from North Somerset, with 13. As expected, conditions on the off road sections were treacherous in places, but this did not deter the first ten runners, who all finished in under one hour.

The race was won by Neil Mytton of Plymouth Harriers in an astounding 55:10. He was followed by Pete Monaghan (Torbay AC) in 56:19 and unattached runner Owen Evans in 56:59. Dave Tomlin was next across the line and first Trotter, in a splendid 57:40, claiming 2nd prize in the M35 category.

Wavell Vigers, a recent addition to the fold, is fast making a name for himself and this occasion was no exception, when he crossed the line as second Trotter, 20th overall, in a time of 1:02:38. Third to finish was Chris Cleave, 24th in 1:03:25.

Thanks must go to Race Director John Caunter and his staff; the marshals, timekeepers and those at the water stations, without whose help the event could not have been staged.

On Saturday, four Trotters attended the Sourton Scramble near Okehampton. Organised in support of Sourton village hall, the 6.6 mile undulating course starts on open moorland above the village and due to recent inclement weather, was rather soft underfoot, with two of the team taking a tumble on mud covered trails. The latter part of the race is run along a disused railway line, now a footpath and cycle track, known as the Granite Way. 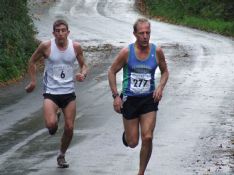 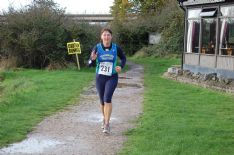 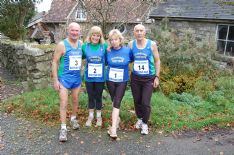