On Sunday, the Teignbridge Trotters hosted the 10th annual Totnes 10k race, held in the grounds of the Pavilion. Numbers were well up on the 2008 figure, with 489 entries for the main race and 69 for the 1 mile fun run. Eighteen members ran the race and scooped 3rd Male and 3rd Female team positions.

The event has supported local charities to the tune of £8,000 since its inception and this year will have raised a sum in the region of £750 for the local charity `Totnes Caring`. Set up by doctors from the town in 1987, the organisation offers assistance to the elderly, disabled and disadvantaged.

On the previous Wednesday, a hardy band of Trotters set off on a reconnaissance of the mainly off road course and were soon waist deep in water, the River Dart having burst its banks! Luckily by the day of the race, the floods had subsided and several course records were to be broken.

Race winner for the third year running was James Baker of Chichester Runners & Athletic Club, in a time of 35:35 - three seconds faster than 2008, but six short of the course record. First lady across the line, in 22nd position, was Jo Meek from Tavistock AC, in a superb 41:07.

Leading the Trotters home was Dave Tomlin in an impressive 39:30 and 14th overall, in a field of 448 finishers. Also untroubled by the slippery conditions under foot, were Garry Smart, 21st in a time of 41:03 and Chris Cleave, 37th in 43:06.

Two Trotters running their first race for the club deserve a special mention: Rachel Besford (daughter of Wednesday regular Kevin) coped well on the difficult terrain, to post a time of 1:10:33, likewise for Steve Brooking, still looking strong at 1:19:33.

In conclusion, our thanks to everyone that helped organise a most successful day, including those from `Totnes Caring`, who assisted with marshalling. A quick reminder that the next Teignbridge Trotters race is the Ladies 10k , to be held at Dornafield Farm Touring Park, on Sunday 20th September. Entry forms can be downloaded from the race diary page. 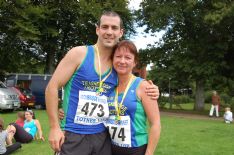 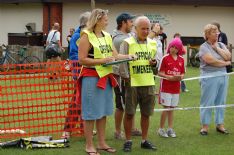 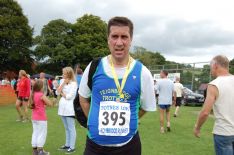