Two coach loads of Teignbridge Trotters staged an invasion of the normally peaceful Cornish town of Launceston on Sunday, for the 4th running of the Treggy7. Admirably hosted by the Launceston Road Runners, the well marshalled course follows mainly rural lanes and contains several challenging hills.

It was a record breaking club trip for the Trotters, with 42 runners completing the seven mile race, in almost perfect running conditions, cheered on by accompanying supporters and friends. There were several impressive sprint finishes to be witnessed and four age category awards to take away.

Ronnie Jones was first across the line, 20th overall in a field of 358 finishers, with a time of 44:51. Not far behind was Adrian Bailey, 24th in 45:35, with Ian Langler 28th in another fine time of 45:56. Almost in his slipstream and only five seconds behind, was Ewan Walton.

Further North, the two Steves: Rawlinson and Wallace attended the ever popular Bideford 10 mile race. Organised by Bideford AAC and with a record number of competitors this year, the relatively level course on roads and disused railway tracks, heads out towards Instow and Yelland, taking in part of the Tarka Trail and has spectacular views of the Rivers Torridge and Taw.

Also on Sunday, two Trotters attended the Bristol Half Marathon. The course starting at the historic Harbourside offers great potential for a fast time and takes runners through the scenic Avon Gorge and twice under Brunel`s Clifton Suspension Bridge. Mark Hamling finished 1.187th in a field of over 16,000 runners, with a time of 1:37:52. Helen O`Malley also ran a good race: 2,582nd in 1:46:34.

The previous Tuesday saw the conclusion of the Run Exe Summer 5k series in Exeter. John Caunter was 41st out of 70 runners, in a time of 21:43 and Tina Caunter 57th in 25:43. The overall series results placed Michelle Willocks-Watts 1st FV 35, John Caunter 3rd MV 55 and Syd Willocks 2nd MV 65.

Upper: Trotters before the start of the Treggy 7 (Roger Hayes) 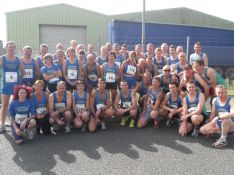 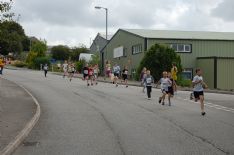 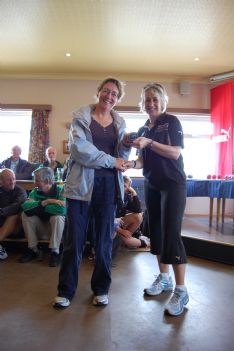