Twenty two Teignbridge Trotters headed up the M5 to Taunton on Sunday, for the 26th Taunton Marathon and Half Marathon. The circular mainly rural Half Marathon route, undulating in places, passes out through Norton Fitzwarren and then heads back east to the finish through Bradford on Tone. Marathon runners are required to complete a second circuit.

Amongst the Half Marathon times, there were several PB`s and two Silver awards, on what proved to be a most testing event, with clouds only obscuring the sun in the latter stages of the race.

On Saturday 4th April, Dave Dunn, always with an eye for a bargain, ran the 10th Bath Beat from the Ralph Allen School at Claverton Down, Bath. Primarily intended for walkers and renowned for its good value, the relatively small and little known event does however welcome members of the running fraternity.

Self navigation is the name of the game on this off road 26.7 mile event. The undulating course with 3,200 feet of ascent, in the countryside to the south and east of the city also follows part of the Kennet & Avon Canal. The fine weather helped tremendously, giving Dave a time of 5:20, which was a 36 minute improvement on his 2008 result, when rain and low temperatures adversely affected his performance.

Photo: Stephen Wallace at an earlier event (Bideford Half Marathon) 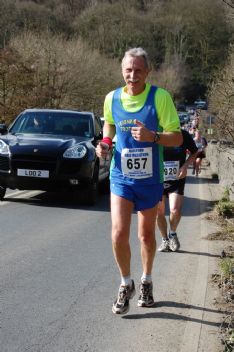