The most challenging event in the South West racing calendar faced ten Teignbridge Trotters on Saturday, as they arrived at Princetown for the annual Dartmoor Discovery Ultra Marathon. The 32 mile circular route via Dartmeet, Ashburton, Widecombe in the Moor and Postbridge was started by Phil Hampton in 1998, as a replacement for the famous Two Bridges 36 mile road race and attracts entries from around the Country.

The prospect of heavy rain failed to dampen the spirits of the hardy band of athletes as they set off at 0930. However, after several hours of battling a torrential downpour, two Trotters were unfortunately forced to withdraw from the race. Dave Tomlin, despite suffering with cramp from about the 20 mile stage, led the Royal Blues home in a time of 4:12:29 and 9th overall, in a field of 118 finishers.

On the previous Tuesday evening, two Trotters attended the 10th Michelmores Charity run in Exeter. Starting on Cathedral Green, the fast 5k course attracts runners of all abilities and this year was run in aid of Hospiscare. First across the line at the former Imperial Hotel was Graham Penn, 212th out of 1,027 finishers in a time of 24:08, followed by Stella Imong, 375th in 26:30.

On Thursday evening, Dawlish Coasters running club hosted the Coastal Dash 4 mile race, which starts and finishes at Dawlish Warren. A welcome breeze kept conditions manageable for the 18 Trotters on the multi terrain course. A loop of the beach across soft sand and over nine groynes thinned out the pack, leaving Garry Smart firmly in charge for the run along the sea wall to Dawlish and back. He crossed the line 5th overall in a field of 137 finishers, with a very impressive time of 23:19.

Mark Wotton blazed a lone trail for the Royal Blues on Sunday at the inaugural `Run in the Wild` at Cricket St Thomas in Somerset. Organised by Chard Road Runners, the multi terrain 10k race also included several streams and is run in support of the children`s charity `bibic`. Mark posted a time of 53:32 for what was a very challenging event, crossing the line 79th out of 253 finishers. 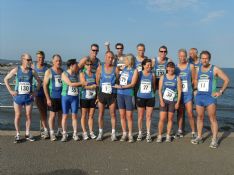 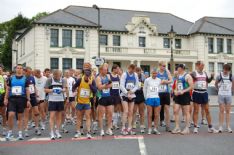 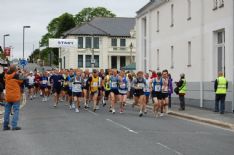