Trotters triumph at the Exterminator

Organised by the College and overseen by South Devon AC, the charity event proved popular, despite the appalling weather. Taking its name from the tough nature of the course and also the college Dalek mascot, the multi terrain route included the picturesque villages of Aish and Stoke Gabriel, with its large millpond.

Dave Tomlin led the Royal Blues home in a magnificent 37:59 and 3rd overall out of 190 finishers. In 9th position and 2nd Trotter across the line was Chris Cleeve, in a time of 40:42. Tracy Elphick was 3rd Trotter and 4th female runner in 46:50. Unfortunately from about this point, the timings went slightly awry, with several glaring errors that remain in dispute.

Further north, another group of Trotters flew the flag at the Bideford 10k, in similarly foul conditions. With 510 finishers, it was the largest number ever hosted by Bideford AAC. Tim Theobald was 1st Trotter across the line in 41:35, followed by an ecstatic Michelle Willocks-Watts, with a personal best 10k time of 47:43. Natasha Reed completed the line up in 57:51. 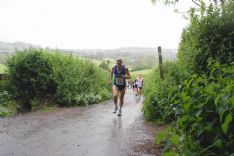