Teignbridge Trotter Peter Blakesley and his wife Angela, a 2nd claim club member, travelled to France on Sunday 5th April for the 33rd Paris Marathon and Peter`s 3rd such event; the splash of Royal Blue undoubtedly lost in the Champs-Elysees, amongst the 31,371 other competitors!

The warm spring weather was evidently to Peter`s liking, as he romped home in 3:58:58, giving him a personal best Marathon time. Angela clocked a respectable 4:35:21.

On Saturday 11th April, lone Trotter Mark Wotton also crossed the water, albeit to the Isle of Wight, for the Newport to Ryde 7 mile road race. The event, organised by Ryde Harriers, one of the oldest athletic clubs in the UK, started at Newport Guildhall and followed an undulating course to Ryde High School. Mark who crossed the finish line 48th out of 109 runners, posted an admirable time of 56:17.

Easter Monday saw Ronnie Jones and club stalwart Syd Willocks competing in the Easter Bunny 10K race in Somerset. The fast flat course started near RNAS Yeovilton and took the runners in a figure eight around the villages of West Camel and Podimore. Hosts Yeovil Town Road Running Club provided Easter eggs for all 334 finishers. The thought of chocolate no doubt spurred Ronnie on as he turned up the power in the perfect running conditions and finished 18th, with a time of 35:56, achieving a personal best 10K time. Syd also ran a good race with a time of 48:52.

Back in Devon, another duo: Gary Watson and Richard Keatley attended the Bampton to Tiverton road race. The 7 mile, Tiverton Harriers sponsored event, was first run on 22nd April 1946, with just 27 competitors and has been an almost permanent Easter Monday fixture ever since. Gary crossed the line 55th (in a considerably expanded field of 202 runners) in a time of 49:55, with Richard at 57:20 in 124th position.

Photo: Mark Wotton in the Isle of Wight (with kind permission of Ryde Harriers) 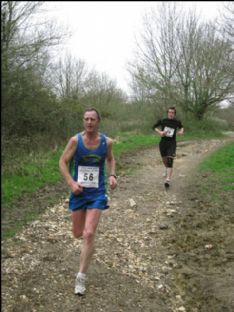