The Teignbridge Trotters held their annual awards and presentation night at the Royal British Legion in Kingsteignton. Club Chairman, Roger Hayes, presided over the event, which brought together 120 of their members. Jose Waller, Club President, was invited up to the stage to present the prizes. Jose, although no longer running, has set many world records throughout her running career; one of which was the fastest marathon by a FV70. Jose crossed the line at the London Marathon at the tender age of 71 in an incredible time of 3hrs 49 minutes.

The mens fastest 10K was won by Daryl ‘Tarquin” Milford, who recorded a time of 35:27 at the Exeter 10K. Daryl also won the fastest marathon time, finishing the London marathon in 2:50:30. Garry Smart won the fastest 1/2 marathon, recording a time of 1:19:24 at Bristol.

The award for the Most Promising Female Newcomer went to Mandy Wheeler and Martin Randall won the Most Promising Male Newcomer. The Most Improved Female was won by Kirsty Bowman, whilst the Most Improved Male went to Nigel Barnett. The committee cup is awarded to a member for exceptional services to the club. This year Club Secretary, Mark Becker, was awarded the trophy. Mark has been secretary since being elected in 2007.

A new perpetual trophy was presented in memory of club member Dennis Milstead, who tragically died this year whilst out running with the Trotters. Guest of honour, Jacquie Milstead (Dennis’s wife), presented ‘Dennis’s Cup” to the Trotters 'Coach of the Year’ chosen by members via an on-line survey. The inaugural winner was Gary Watson.

During the Trotters 32-year existence they have awarded six members with life membership. That total was increased to eight as Dave Dunn and John Caunter were both honoured with the accolade during the presentations. Dave and John were presented with engraved decanters for their dedication to the club over a period of more than 20 years. Chairman, Roger Hayes, spoke of the wonderful work that both men had done for the Trotters and concluded his speech by declaring them 'True Trotter Legends’.

The final award of the night, the Horses’ Arse Trophy, was presented by John Skinner. Sharon ‘Fizz’ Bowman was this years winner. Having decided to take her own toaster (because no one makes toast like she does) to a hotel in Milton Keynes which she was staying in the night before running a marathon. Sharon proceeded to set the fire alarm off whilst making toast late at night. This resulted in the hotel being evacuated and the car park outside full of pyjama clad guests!

After a raffle and a buffet meal, the Trotters filled the dance floor and danced the night away (and there wasn’t a fireman to be seen!) 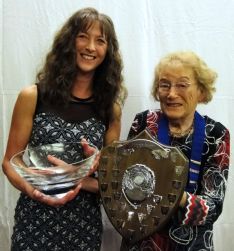 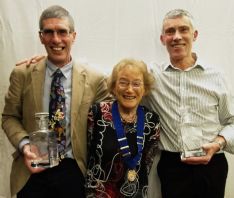 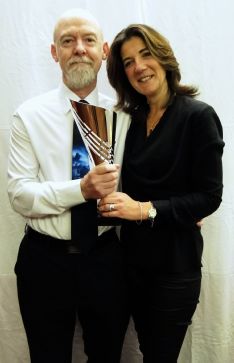