A busy few days for Trotters...

On what has been a busy few days, Sally Ingledew and Lance Mason completed the Giants Head Marathon on Saturday 28th June in Dorset.   It is a tough off road event and Lance came joint 4th in 3.55 and Sally managed 5.39.   Jo Becker did the corresponding Sydling Hill Race, which was a 6.5(ish) mile offroad event on the same day. This course was also very hilly and on what was Jo’s first race this year she managed a time of 1:12:24.

Keith Anderson competed in the The Lakes 10 Peaks on 28th June.  The idea of this event is to visit the summits of the highest 10 mountains in England (all in the Lake District, in 24 hours).

Keith did brilliantly and managed to complete 9 peaks inside 13 hours.  The start was at 5.00am and took competitors straight up Helvellyn, 950m, then across to the hub of the fells that includes Scafell Pike (highest in England at 978m), Scafell and Great Gable.

The terrain is very demanding, including expanses of bog, boulders, rocky paths and steep scrambles. Keith decided to stop after 16 hours where he had covered 35 miles, including 4500m of ascent. Weather was kind in that winds were light and it was generally overcast and not too warm.  In fact, it was chilly at the summits and high passes. Keith is hoping to have another crack at completing all 10 next year.

Kat Zaple and Sarah Ross ran in a race on Sunday 29th June, called The Revelstoke Run 2014.  It is a very low key event and is a 10 mile multi terrain ran from St Peters Church, Noss Mayo and goes out along lanes, coastal paths and woodland tracks finishing at the Ship Inn, Noss Mayo.  The event boasts stunning scenery, great marshals and the pair enjoyed the event finishing in 1hr48.

Several Trotters took part in a World Record attempt recently, for the GB Relay.  Known as “the people’s relay”, the event required runners to carry a baton with a GPS signal around mainland Britain through 594 stages and over 7000KM in total with about 2000 runners.  The event is due to finish on Wednesday 2nd July in Scarborough, but several Trotters were able to take part in local legs.

Four Teignbridge Trotters carried the baton, helped by willing supporters. Section 410 was held on 23rd June at around 1.30am and Katrina Zaple ran from Thurlestone to Cliff Road, Salcombe, supported by Sarah Ross.

Later that day and with the schedule running about 5 hours behind, Section 423 was ran by Peter and Angela Blakesley from Ilsham Marine Drive in Torquay to Marine Parade in Teignmouth.

At this point participants were running late into the night, but the baton was passed on to Sharon Bowman who was supported by Jennie Roberts, Eleanor Taylor, Ryan Anthony, Tom Besford, Kevin Besford, Kirsty Bowman and Emma Pearcy who ran from Teignmouth to Dawlish for section 424.  The baton was then handed over to Jacki Woon (supported by Bruce Campbell), who ran section 425 from Dawlish to Exeter, finishing at around 1:30am.

Middle: Keith Anderson at The Lakes 10 Peaks at 4:30am

Bottom: A few of the Trotters who took part in the GB Relay

Please note I have drafted a report for Torbay Half, but I'll wait for the official results to be made available before publishing it. 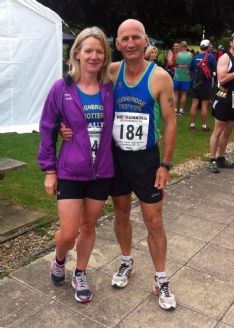 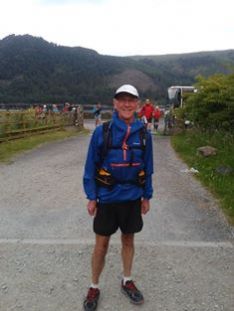 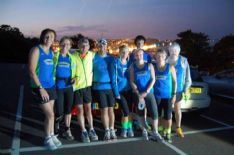