A busy weekend of racing for many Trotters

There were two Club Championship races over the weekend of Saturday 12th and Sunday 13th July.   Firstly, Saturday saw 17 Trotters take on the Otter Rail and River Run.  This is a largely flat 10K race, ran on mostly offroad terrain.  It was a warm day, but a lot of the course was in the shade as the competitors ran through the woods, whilst also navigating several stiles.  It is a low key, friendly race organised by the village of Tipton St John, with runners receiving a bottle of Otter beer for finishing!

3 Teignbridge Trotters who raced in Saturday’s Otter Rail and River Run decided that one race in the weekend wasn’t enough.  They were joined by 7 others for the Wellington 10mile Road Race on Sunday.   Conditions for the undulating course were warm with a hint of a breeze at times.

Lastly, husband and wife team of Lucy and Rod Payne crossed the line together in 1:36:06.  Having both been out injured for a long time, Lucy commented that the weather was kinder than last year and obviously enjoyed the event as she managed to break her own 2-year-old club record for a female 60+ by a minute.

As well as the Club Championship races, there were other events going on that had Trotters in attendance. The Plymouth Olympic triathlon took place at the Mount Batten Centre in Plymouth. The event started with a 7.30am sea swim of 1500 metres then an undulating bike ride of 26 miles followed by a challenging 10km run, on a two lap circuit. The weather was good except for a head wind in places on the bike, the route for which took competitors out to Modbury.

Trotters in attendance included Paul Vowden (2:29:45), Russ Wheeler (2:34:06), Mandy Wheeler (2:55:13) and Helen Anthony (2:41:02 and finished 3rd lady). Sharon Bowman also successfully completed the event, which was her first attempt at the Olympic distance triathlon and finished in 3:19:11. Gary Caunter was also at the event, but unfortunately had to retire.

Sally Ingledew and Lance Mason travelled to Tenby in Wales to do the marathon, which is part of a Long Course weekend triathlon event. It comprised of a hilly one-lap course in what were cloudy but warm conditions. Lance came 14th in 3.02.55 and Sally did 4.12.57.

Middle:  At the start of the Otter Rail and River Run (Sharon Hutchins) 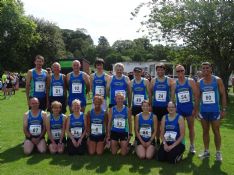 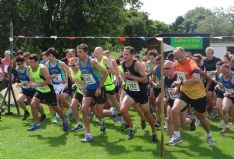 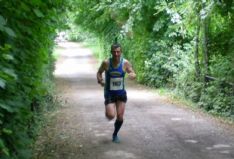