A great weekend of racing as spring marathon season kicks into gear....

On a busy race weekend in the UKs race schedule that arguably kicked of the Spring marathon season, several Trotters competed at the marathon distance at two different events; Greater Manchester Marathon and Taunton Marathon.

As well as hosting a marathon, Taunton also staged a Half Marathon on Sunday 6th April. The Half Marathon in particular was well attended by Trotters, as the event is part of the club championship. The half marathon course is a single lap of the route and the full marathon course is two laps. The bad weather held off at this well organised event, although there was a headwind for some sections of the course.

Some Trotters claimed category prizes at the Half Marathon distance. Garry Smart claimed 1st M45 with a time of 1:20:03, closely followed by Lance Mason who finished in 1:22:38 claiming 2nd M50 in the process. Jackie Woon continued her great form and brought the Trotters ladies home in a time of 1:41:06 whilst claiming 1st F50.

Also, some Trotters achieved some personal milestones at the event including Cath Pilton who managed a sub-2hr half for the first time, and came in with a 3-minute PB in a time of 1:59:51. Stephen Morfey achieved a strong PB, finishing in 1:35:41. This is a great springboard onto future goals that he has later this year, including the challenging full Outlaw event. Nicky Cowling completed her first race at this distance, finishing in 2:19:42. Nicky enjoyed the event and didn’t find the hill at mile 11 too bad (in comparison to the Devon hills Trotters train on regularly!).

Manchester Marathon is in its 38th year and is a popular marathon with runners from all over the country. With only 54m of elevation across the whole route it is a good candidate for a fast effort and Trotters did not disappoint.

Mandy Wheeler finished in a fabulous time of 3:24:00, which was her first marathon. Next up was David Taylor who claimed the second V65 prize overall with a time of 3:47:23. As well as finishing in this great position at such a large event, David’s time is also a club record, breaking Dave Foster’s time that has stood since 2000.

Emma Pearcy showed that her consistent training in preparation for this race paid off as she claimed a PB by going under the 4hr mark for the first time, with a finishing time of 3:57:01.

Finally at Manchester, the mother and daughter duo of Sharon “Fizz” Bowman and Kirsty Bowman crossed the line together in 4:32:40, which was Kirsty’s first effort at this distance. Completing the event together was a very proud moment for them both and collecting the quality medal and T-shirt topped off what was a great weekend for the pair.

Finally, four Trotters ran in the Honiton Hippo, which is 7.5mile race off-road event ran in extremely challenging overcast and drizzly conditions. As well as the rain, the course went through muddy woodland paths and fields, stretches of waist-deep swamps, farmyards with innumerable stiles and some tarmacked lanes, all rounded off with several river crossings to negotiate. Trotters completed the event as follows: Jim Donovan 1:11:33 (54); Stephen Wallace 1:26:42 (118); Steve Rawlinson 1:29:52 (131); Stuart Moulson 1:41:32 (161).

Well done all! Next up, London! 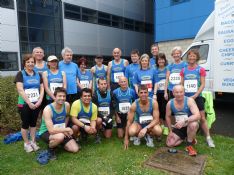 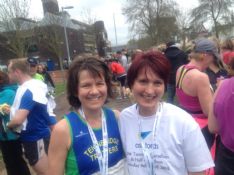 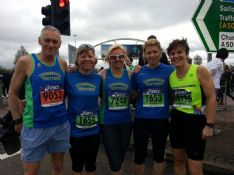