A record for Peter K and Emma's Memory of Lisbon

On Sunday 12 October, Peter Kirby travelled to York to run the 2nd Plusnet Yorkshire Marathon. In cold, misty conditions runners set off from York University. They went past city centre landmarks including the Minster and headed out along closed country roads to Stamford Bridge. They then returned to finish at the University. Peter completed the marathon 792nd out of 3685 finishers in 3.39.43. breaking his own MV65 club record by nearly 4 minutes. The race was very well organised & supported.

Also on Sunday Mark Wotton took part in the Forest of Dean Marathon. The race takes place at Mallards Pike in the forest and is 8 laps of a 5.3 k course, each lap is uphill for the first 3k with a flatish last part.
The race is quite low key but very friendly and well marshaled with plenty of refreshments available.
The runners were greeted by a pretty chilly start to the race and it never realy warmed up. Participants could run as many laps as they liked and about 80 people covered the marathon distance. Mark was placed 22nd in 4.31.49.


Sunday also saw the first round of the Brooks Cross Country League in Plymouth. In the Ladies' race Hannah Walsh was 52nd in 27.52 and Hylda Stewart was second in her age group 78th in 29.51. In the Men's race lone Trotter Steve 'Ronnie' Barker was 100th in 38.32.

Photos: Top Peter Kirby in Yorkshire and Middle and Bottom: Trotters on Tour in Lisbon


Thanks to Emma pearcy fo the following piece.
Globe-Trotters conquer Lisbon
Marathons, mojitos and memories were made when a group of travelling Trotters and their partners headed to Portugal for the annual club trip. The 2014 destination was edgy Lisbon; a city of seven hills, big vistas and live-to-party nightlife.
Thirteen Trotters took part in the Lisbon Rock ‘n’ Roll series, the world’s largest running event with races held in cities across the globe. The Portuguese showcase includes a marathon, half marathon and 5km and our intrepid Trotters were represented in each.
The mainly flat marathon starts in the pretty Atlantic coastal town of Cascais and weaves its way along a famous road called the Marginal. Parallel to the River Tangus the 26.2-mile run passes through surfer-friendly resorts like Estoril and ancient monastic towns such as Belem before entering Lisbon and finishing in the flat and flashy area of Pavilhao Atlantico.
The scorching hot weather of the days before gave way to cooler conditions on race day and in a field of 2,865 finishers the Trotters can proudly say they had two within the top 10 of the Great British runners.
Lance ‘Skippy’ Mason, who helped pace Rog ‘Chairman’ Hayes, led the Trotter pack home in 3.10.09. Skippy was ninth British male, 10th male over-50 and 137th overall.
Chairman Rog clocked 3.10.10, his quickest at that distance since 2008 and his 50th sub 3:30 marathon, placing him 10th GB finisher and 131st male. He was followed by Roger ‘Smokes’ Hales in 3.51.57.
Fresh from achieving his first sub-4, Dave Dunn repeated history by running a second sub-4 marathon in eight days. Dunners dug deep to post a fast last mile to dip under the magic four-hour mark and his efforts were rewarded with a 3.59.59 time, much to his delight.
Marathon queen Sally Ingledew brought the ladies home in 4.16.45 and was followed by Emma Pearcy in 4.23.58. Tamsin ‘Cookie’ Cook channeled her first-time marathon nerves into a strong and spirited performance crossing the line in an impressive 4.34.36.
In what embodies the Trotter family spirit, brother and sister Mark ‘Wurzel’ Wotton and Ruth Johnson ran together. Ruth showed a real determination with her run with injury scuppering her ability to train properly in the weeks leading up to it and battling it throughout. Mind over matter meant she conquered the course in less than five hours alongside her big brother. Wurzel posted 4.55.52 and Ruth 4.55.53.
The better-known, longer established and bigger race, the half marathon, starts on the photogenic Vasco da Gama Bridge. It runs an out and back route, picking up marathon runners at its 12.5km turnaround point. This race drew 5,775 runners with Steph Ross and Becky and Keith George pulling on their Royal Blue vests.
Steph brought the trio home in 1.57.18. Keith and Becky went for the leisurely ‘no pressure’ option, ditching the watches and choosing to just enjoy the open road before them – with the added bonus of seeing the sights and not experiencing the post-finish limp. Becky’s time was 2.16.48 with Keith on 2.16.50.
Opting for the 5km, Vic Hales completed the Devon delegation although no finish time was available at time of going to press.
Accompanying the gang were the Trotters own John ‘Skinns’ Skinner, Jimmy Donovan and his brother John ‘Dono’, both of whom joined the group in Lisbon as part of their epic three-week motorbike tour of Europe, and Brenda Dunn. All provided fantastic support as well as contributing to some very memorable moments along the way. There was amazing support en-route too with huddles of Brits cheering on the runners and clearly getting very excited when spotting a homeland vest! 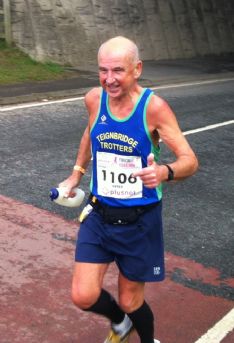