On the weekend of 9th August, Allen Taylor competed in the North Downs Way 100 mile race.  The terrain of the event is 20% on road and 80% on trails, and is a point-to-point course taking the competitors from Farnham in the Surrey Hills to Wye in Kent.   As well as the mileage being a massive undertaking in terms of preparation and determination, the course has a total climb of 9930 feet and an overall elevation change of 20000 feet.   It involves nighttime running on trails which is also a challenge compared to daytime running.

Allen has been building up and preparing for this event for some time, having completed a 40-mile event in April, a 100K event in May and the club's own Dartmoor Discovery 32-mile event in June. The event was very well organised with a lot of Trotters being able to track Allen’s progress through the cut offs on line and the club’s facebook group was buzzing with well wishes as Allen was out on the course.  Teignbridge Trotters legend and 100-marathoner Roger “Smokes” Hales travelled up to run the last 40-miles with Allen, and he was also supported by his wife (Marie Taylor) and other support crew along the way.

On the day itself, everything was going to plan until around 1am when the runners were hit by a rainstorm that flooded the tracks within minutes. At 90 miles they were running through floodwater and it was getting pretty cold. To make it worse their rain jackets were in the boot of Allen's car at the finish line, but at this stage the end was in sight so they dug in to get to the finish.

You can see Allen moved his way up through the rankings throughout the race and finished in less than 24 hours. This is a huge achievement as it means that Allen claimed the much coveted “100 miles – One Day” buckle.

Teignbridge Trotters are hugely proud of Allen and what he’s achieved as everyone can begin to recognise the guts and determination required to compete in such an event - we all knew the outcome was never in doubt!

On Sunday 10 August, Sally Ingledew and Lance Mason went to Salisbury 54321 events where they both competed in the marathon.  The run was a mixture of terrains on an undulating hilly but scenic route.  It took on farm tracks, fields, woods and bridleways as well as country estates, castles and the Salisbury cathedral.  At the start of the race there were showers but the weather cleared up quite early on in the race leaving the remnants of hurricane Bertha with just a few gusts of strong wind.  Lance came 3rd with a time of 3.20.51 whilst Sally ran with a group of friends with a time of 5.03.16.

Middle: The challenging elevation profile of the event 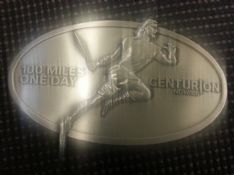