Bristol and West 1-2, but Trotters takeover wins them the Team trophies!

A record 201 runners entered this year’s Chudleigh Carnival Road Race. Many experienced runners agree that this run is a ‘challenge’. Despite – or maybe because of – this, they return year after year. Also each year many first-timers give it a go.

This year had cooler weather than last year, which clearly suited the record number of runners. The first 3 over the line were the same as last year. Tom Merson, in a time of 28:49 and Andrew Chambers in 29:30, both on Bristol and West AC were followed by Torbay AC’s Peter Monaghan in 31:30, who was also 1st in the category of Men 45-49. Kevin Squibb of Tiverton Harriers was 4th overall and 1st Male aged 40-44.


Local club Teignbridge Trotters always support this run well. This year, the town was swamped in their royal blue, as 55 Trotters ran. 1st Trotter across the line and 2nd man aged 40-44 in 32:56, was Daryl ‘Tarquin’ Milford. Trotter Geoff Davey was 3rd male 40-44 in a time of 34:27. Kieran Crewes was first Junior Man and 3rd Trotter home in a time of 34:50. These 3 earned the Trotters the men’s team trophy.


Tiverton’s Kerry Roberts was 1st man aged 50-54 in 34:59. The next 5-year age group winner were Martin Hawill of Exeter Harries, 40:58 and Lewis Jones of South West Road Runners in 40 minutes. 1st male aged 65 and over was Ian Melhuish who was 1 of 10 Minehead runner who enjoyed the run.


South West Devon AC’s Naomi Flanagan was first woman across the line in a time of 37:15. She was followed 13 seconds later by Cleo Flanagan of Erme Valley Harriers. Cleo was also 1st female aged 40 or over. With a time of 38:12, Michelle Moore was 3rd female finisher.

The Bishop Lacy had bought lots of trophies. This year, these included one for Junior Men. Following Keiran Crewes was Tom Besford, fellow Teignbridge Trotter. Iain Ross, of Honiton RC was 3rd in this class in 36:06. 9 Junior Men ran, competed the race. Kate Cridland earned the trophy for the 1st Chudleigh woman home in 44:25. Trotter Abi Blee was 2nd in 45:10. 1st Chudleigh man was Exeter Tri’s Stuart McLay in 34:41.

A total of 46 Chudleigh residents completed their local race. These included 11 ‘Scrambled Legs’ who were running to raise £3000 for Cancer Lifeline South West. They were inspired by Sara Lea-Weston and have exceeded their target.
Exeter’s Ironbridge Runner sponsored vouchers for the first 3 men, first 3 women and 1st male and female aged 40+.

This undulating and hilly route starts and finishes outside the Bishop Lacy. This was a great post-run refreshment spot, where many runners showed-off their well-earned t-shirts.

The first mile and last half mile are in the town. With over a mile to go to the finish, the runners were all spurred-on by hearing the cheers of the crowds in the town. Many runners passed on their thanks to the people of the town for the great support and marshalling along the route.

Mark Wotton did the Stuart Wild Memorial Marathon on Sunday 20th July.  The race takes place in Worcester and is organised by Black Pear Joggers.   It is a 10 lap marathon around Perdiswell Park and golf course and the conditions of the race were very hot.  There was also a relay race at the same time in groups of 2 or 5.  It was quite a small event consisting of about 40 runners and Mark's time was around 4.40. 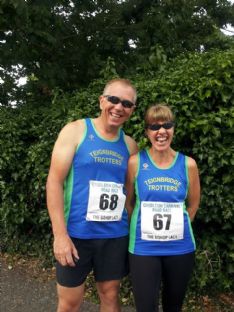 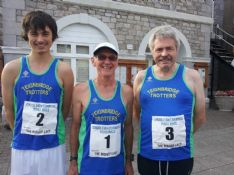