Twelve Teignbridge Trotters took part in the latest Club Championship race, the Dalwood Fayre 10K.  A tough course over mixed terrain, with a couple of tasty hills thrown in for good measure.  The Twelve that made the journey to East Devon all picked up valuable points in their challenge to complete the Championship.

There was a bit of a breeze, unlike previous weekends, which certainly helped the runners, although that said, it was still a pretty warm day for racing.  Mandy Wheeler continued in her rich vein of form, crossing the line as first lady in a time of 49:11 and 10th overall.  Club Chairman, Roger Hayes, had another solid race, finishing in third place overall in a time of 43:04.

The Club Championship takes a break for a couple of weeks before the double header of the Torbay 10K (24 Aug) and the Lustleigh 10K (25 Aug).

The evening of Thursday 24th July saw a gathering of 124 runners at the Kingsbridge Fair Week 10km.  Katrina Zaple and Stella Thompson braved the extremely warm weather, which was tough for the majority of runners.

The race started at the Recreation Ground before taking runners along to the town centre. The course then went out onto scenic, quiet country lanes to a loop and then back on the same route into town and branching off to finish at the Leisure Centre.

The course was very hilly – mostly uphill.   At one point the runners were enjoying a lovely downhill stretch only to realise that they would be running up it on the return!   Kat commented: “I would say this is one of the toughest 10km races I have completed, but thoroughly enjoyed it!”.   Kat completed the event in 59:27, coming 86th out of 124 and fellow Trotter Stella Thompson finished in 69:55, 121st place.

Sally Ingledew and Lance Mason travelled to Northampton on the weekend of Saturday 26th July to compete in the 'Round the Reservoir' double marathon. The conditions were very hot on the Saturday and Lance managed 3.19, with Sally completing the day in 4.51. Sunday was cooler but still warm conditions for running. Lance, suffering with an ongoing injury, completed Sunday’s race in 3.58 and Sally managed a negative split for the weekend, with a 4:28.

The Commonwealth Games marathon took place on Sunday 27th July, in Glasgow. Avid readers will know I’ve been mentioning Steve Way a fair bit over the last few weeks and many Trotters were able to share the road with him at the recent Torbay Half Marathon (Trotters report) and Allen Taylor completing a 100K event where Way broke the British record (Trotters report).

Prior to the race, the BBC did a great piece on him (BBC), which I think sums him up well and I truly find what he's achieved inspirational, going from an overweight smoker to representing England at the marathon.

Steve has been doing the rounds on the BBC and national papers after the event, as he managed to exceed his personal targets at the race. Firstly, he finished in the top 10 and secondly he managed a PB by knocking over a minute off of his time from London. Thirdly, he broke a long-standing British V40 record for the marathon (previously held by Ron Hill since 1979) with a fabulous time of 2:15:16 (runbritain rankings).

If you're interested in Steve he has a very good blog.  Recent posts include pictures and information from inside the ahtlete's vilalge in Glasgow and also the Manchester holding camp.  I am very sure he'll be updating his blog very soon with information about the event from his point of view!

Top: Lance and Sally at their double marathon

Bottom: Steve Way at Torbay, in training for breaking the V40 marathon record at the Commonwealth Games 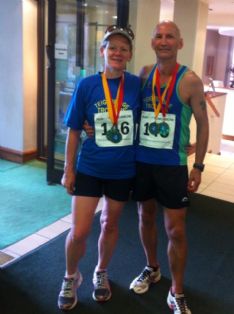 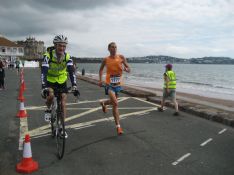