The weather on Sunday 2nd February was rather better than expect and turned out to be near perfect running conditions for the annual “Fulfords 5” race starting and finishing at the Exmouth Leisure Centre. Ran by the Exmouth harriers the course took the 261 competitors along Exmouth seafront and into the town twice on a five mile race. There was plenty of crowd support on the way and the 28 Teignbridge Trotters put in a good show of “Royal Blue”.

Further up country in Somerset lone Trotter Emma Pearcy took on the “Hestercombe Humdinger” which was a 9.5 mile road race organised by Taunton Running Forever running club. The course was a figure of eight both starting and finishing at Hestercombe Gardens. The route is hilly and incorporates almost 1500 feet total climb up into the Quantock hills. The race attracted 216 runners and Emma posted 1.25.10 and 139th place .

Sharon "Fizz" Bowman went to Dawlish to compete in the first of 4 events staged by Exeter Triathlon Club in the next four months.It was an "Aquathlon" which consists of a 600 metre swim(24 lengths) and a 5km run straight after.Sharon completed the event but no times are published at time of going to print.

PHOTOS-TOP-  Tweedy ,Watsa and Graydon at Fulfords    MIDDLE-  Smile its Craig and Helen !       BOTTOM-  Emma before the Humdinger. 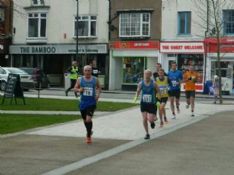 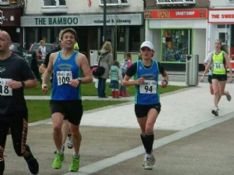 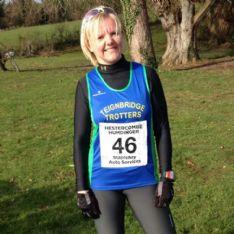