John Ward smashed his own record to win the Dartmoor Discovery (DD) ultramarathon for a second time on Saturday (7 June). Cool conditions and light showers spurred the Bideford AC runner to storm round the 32-mile course in an astonishing 3:29:24.

Ward, who won the 2012 race by setting what seemed at the time to be a daunting course record of 3:33:36 said: ‘I realised that I had a chance of setting a new record when I went through the half-marathon stage at Ashburton in 1 hour 18 minutes, which was a much quicker time than two years ago. At that point, I decided to keep the momentum going and just cracked on. I ran well until around 28 miles, when the wheels started to come off a bit. After that I was just trying to survive.’

The DD, organised by leading South West running club the Teignbridge Trotters, starts and finishes in Princetown and is the UK’s longest single-lap road race. It is renowned for stunning views, tough hills and notoriously unpredictable weather. The race has been steadily growing in popularity since 2010, when the Trotters took over its organisation. This year, participation in the event passed a new milestone, with 202 finishers crossing the line. The dropout rate was low, given the challenging nature of the event: just 11 of the 213 starters failed to finish.

Roger Hayes, who is also the DD’s Race Director, said: ‘Ever since we took over the DD we’ve wanted more runners to share the unique experience that an ultramarathon on Dartmoor offers. I’m thrilled that more runners are now enjoying the DD. John Ward’s awesome sub-3:30 performance proves that this wonderful race attracts a genuine quality field. It was the icing on the cake for yet another great Dartmoor Discovery.’

Team competitions are always keenly contested at the DD. The Teignbridge Trotters successfully defended their crown in the men’s event, thanks to classy runs from Garry Smart (4:02:49 and fourth overall), Lance Mason (4:14:21 and seventh overall) and Ewan Walton (4:35:37 and 18th overall).
Rebecca Mingo led the Bere Alston Trekkers to victory in the ladies’ team event, backed by determined performances from Dotty King (5:52:08) and Rachel Wood (5:56:54).

Marathon legend Steve Edwards started the race and presented the prizes. Edwards has numerous world records to his name, including a total of 560 sub-3:30 marathons.

An event on the scale of the DD requires a significant logistics effort. An estimated 150 people supported the runners as they took on Dartmoor. Specialist teams from the Dartmoor Radio Club, Dartmoor Medical Services and The Massage Clinic worked alongside scores of volunteer marshals, timekeepers and caterers. This year’s race was sponsored by Ironbridge Runner, St Austell Brewery, the Road Runners Club, South Dartmoor Community College and the Ilsington Country House Hotel.

About the Dartmoor Discovery: The Dartmoor Discovery takes in some of the most challenging hills in any UK road race. First run in 1998, the race was conceived by Phil Hampton, who continued to organise it until his retirement in 2010. Originally, the course was 34 miles. It was shortened to 32 miles in 2002, to avoid runners having to cross a busy road in Princetown. In 2001, the event was cancelled in response to a severe outbreak of foot and mouth disease across the UK. Anyone wishing to enter the Dartmoor Discovery should be aware that it is a genuinely tough event aimed at experienced runners who have already completed a marathon. A strict, six-and-a-half-hour cut-off policy is in place. After this time, race marshals will be withdrawn from the course.

About the Teignbridge Trotters: The Teignbridge Trotters is one of the South West’s leading running clubs. With more than 200 members and an experienced, fully qualified coaching team, the club is renowned for the friendly welcome it offers to runners of all abilities. In addition to the Dartmoor Discovery, the club stages five races of varying distances throughout the year. There are regular club training sessions on Monday and Wednesday evenings, at Coombeshead Academy, in Newton Abbot. For more information, please visit www.teignbridgetrotters.co.uk

Top: John Ward tackling one of the hills (picture taken by Nigel Penwarden).

Middle: Trotters before the start (picture taken by Nigel Penwarden).

Bottom: Allen and Gary at the marathon point (picture taken by Claire Widdicombe). 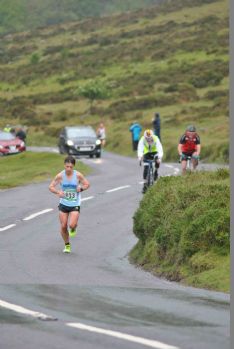 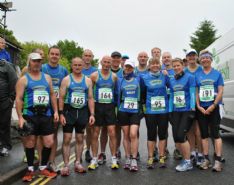 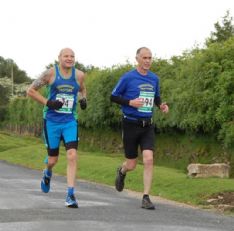