Points up for grabs at Parke Parkrun


The Snowdonia Marathon takes place in the stunning setting of the Snowdonia National Park. In the latest running of the event Teignbridge Trotters were represented by 26.2 mile veterans Lance Mason and Sally Ingledew. The race is run over a tough and demanding route and Skippy Mason was 86th overall in 3.17.51 with our marathon queen Sally 855th in 4.18.37. Both were in marathon action at Dartmoor Vale the previous week and in Lisbon the weekend before that.

Following the Parkrun on Saturday Tina Caunter travelled up to Fleet in Hampshire to accompany her daughter Amy for her first ever race, The Fleet 10k. Proud mum Tina and daughter were 710th and 711th respectively with Tina clocking 64.52.

Also on Sunday at Thurlbear near Taunton it was the Herepath Half Marathon where Jimmy Donavon and Emma Pearcy lined up in Trotter’s Royal Blue. The Herepath Half is a multi-terrain race, organised by Taunton's Running Forever Running Club and it was the second running of the event.
Emma takes up the Story: Jimmy Donovan and Emma Pearcy pulled on their Royal Blue vests and off-roaders for the Herepath Half on Sunday.
This friendly, inclusive 13.7-mile multi-terrain race organised by Taunton’s Running Forever Running Club, offered 150 places and sold out in advance. The demanding circular route along the Staple Fitzpaine bridlepath took runners through a variety of landscapes including forest trails, countryside lanes, grass fields and steep slopes.
In his return to distance off-road racing after a summer break, Jimmy put in a strong performance to clock 2:13.16 and 62nd place. Emma, in her longest run since Lisbon marathon earlier this month, was pleased with 2:14.26 and 65th place overall.
Ascents were rewarded with panoramic views from the Blackdown Hills and mountains of coffee and cake afterwards with each runner given a pint glass as a memento; a fantastic and fitting prize for Trotters. Thanks Em.
For the record Herepaths were originally important trade and communication routes between settlements during the 9th century - they are often known as people's paths. End of history lesson.

The following is a report received from our Fizz who took part in The Dartington Duathlon participating with her number originally allocated to our recently departed friend Dennis Milstead: The Dartington Duathlon is a well organised and friendly event. Following on from the sprint distance (5km run 13 mile bike and 3km run) there is an Olympic distance event. This involved a 10km run on a traffic free course around the Dartington Estate. Then it was on the bike for a 26-mile 2 lap course from the estate to Marley Head roundabout and back with a strong head wind and a very steady undulating course. After the second transition it was running shoes on again to embark on an off-road muddy course which sent runners through woodland over a fallen tree and up steep steps. It was just over 5km.
Tarquin and Stewart Dunn made up a relay team and won with Tarquin posting 36.52 and 21.55 for the respective runs and Stewart did 1.12.05 making the total time of 2.11.13.
Fizz posted 50.50 & 32.22 for the runs and 1.35.17 for the cycle and with transitions made her total time 3.00.39 and 4th in her age group and 8th lady.
Becky George was 8th in her category and 14th lady posting 53.03 & 37.17 for the runs and 1.37.40 for the cycle making a total time with transition 3.11.05.
Thanks Fizz you did Dennis proud.

Also on Sunday compulsive marathoner Mark Wotton took on The Brentwood Marathon, a 12-lap race around the Weald Country Park. The race is run in conjunction with a 10k and the woodland trails were very hilly and muddy. On lap 7 Wurzel tripped over a tree root and suffered a heavy fall but after some first aid and running repairs he recovered to complete the race in 4.53.12.

And much closer to home Katrina Zaple was surprised to find that she was the only Teignbridge Trotter at the start line of the Tavy 7 near Tavistock. After casting off her feeling of rejection she set about her business and completed the race 289th in 1.12.45.

Photos Top: Birthday boy Mark at the Parke Parkrun, Middle Emma and Jimmy at the Herepath Half and bottom: Tarqs and Stew, Team winners at the Dartington 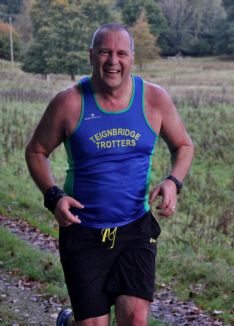 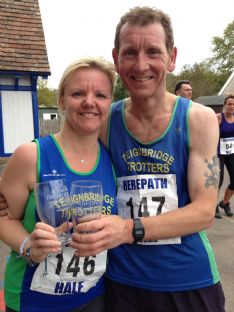 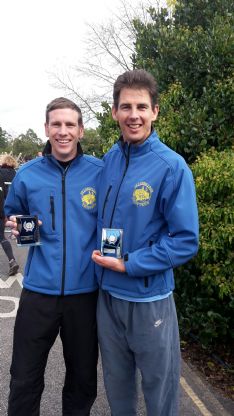