Races a Plenty and Prizes Galore at the Weekend

After a quiet weekend previously the mighty Teignbridge Trotters were out in force at various events over the weekend.

Some leftover business from the previous weekend was an outstanding run by Garry Smart at the Bristol Half Marathon, where he finished 81st overall in a time of 1.19.24, whilst at the same time claiming Lance Mason's club record in the MV50 Half Marathon category by over 2 minutes.

Victoria Tymoczko was in Finsbury Park for the Ladies London 10k.  This was her first 10k and on the 2-lap course with some hills thrown in for good measure, she completed in a highly creditable 54.40.

Closer to home Tom Besford was in East Devon for the Stockland Stamper, a tough race run over fields, roads and tracks.  Tom was 18th out of 66 finishers in a time of 47.30.

One of England's oldest marathons, The Robin hood Marathon in Nottingham attracted Skippy and Marathon Queen Sally Ingledew.  The course is fast and flat but the hot late-September conditions made the going tough.  Lance completed the course in a time of 3.14.10 and Sally crossed the line in 4.07.39.

Several more Trotters travelled to North Devon for the inaugural Barnstable Marathon and Half Marathon.  With results eagerly awaited and unfortunately received too late to meet the newspaper cut-off, early reports were of several of the Royal Blues winning prizes.  In the Half Marathon, Tarquin Milford was 2nd Male 40, Roger Hayes was 1st Male 45, Peter Blakesley was 1st Male 55, Peter Kirby was 2nd Male 60 and Bev Dennis was 3rd female 50.  Tarquin, Chairman Rog and Pete Blakesley also combined to pick up the 3rd mens' team prize.  Not to be outdone in the full marathon distance Gary Clark, Geoff Davey and Dave Dunn came together to win 3rd male team prize.

New members Martin & Jo Randall ran the Berlin Marathon on Sunday where the world record of 2.02.57 was set by Kenyan Dennis Kimetto. Martin & Jo ran together to finish in 4.04.19.

Last but not least Kat Zaple was in action again at the weekend for the Mud & Sweat Run in the River Dart Country Park.  Kat took on the 10k option which involved 2 laps of the assault course and she enjoyed herself immensely whilst clocking up a very handy  73.11.

Photos: Top: Trotters at the Barnstaple Marathon and Half (Photo courtesy Angie Blakeley)

Middle: A quartet of Trotters at the Dawlish Tri (Thanks to Fizz)

Bottom: Skippy and Sally at Nottingham (Thanks to Sally) 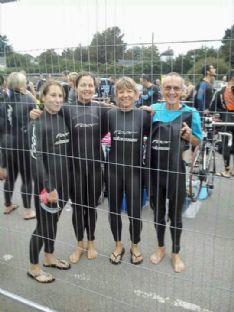 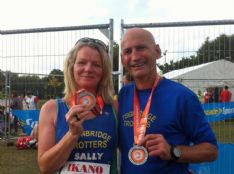