Gary Clark was the sole Trotter competing in the Tavy 13 on Sunday 30th March, which is organised by Tavistock Athletic Club and is in its 5th year. Gary had an enjoyable run on a course that has just a few undulations, with roughly a mile effort uphill at around 6 miles. Fortunately, there was a nice breeze on the course and there were 262 runners who completed the event. Gary finished in 56th with a time of 1:40:43.

Allen Taylor, Noel Fowler and Ryan Antony competed in the Exe to Axe, which is organised by Sidmouth Running Club. Due to two diversions because of recent landslides, the 22-mile route followed the coastal path from Exmouth and goes through Budleigh Salterton, Sidmouth and Branscombe before finishing in Seaton. It’s a challenging course ran in what were hot conditions with 172 runners completing the event. Allen completed the event in 3:56:09 in 55th position, Noel finished in 4:33:28 (115th) with Ryan finishing in 5:39:36 (163rd).

Finally, on a weekend where there were no club championship races, Steve Rawlinson and Stephen Wallace competed in the Arlington Court Canter 10K, on Sunday 30th March. It is organised by North Devon Road Runners and the route goes through the National Trust Arlington Estate near Barnstaple, taking in scenic woodland and parks. In glorious summer weather, 159 runners completed the event and Stephen Wallace completed in a time of 1:02:45 (112) and Steve Rawlinson finished in 1:06:20 (127). 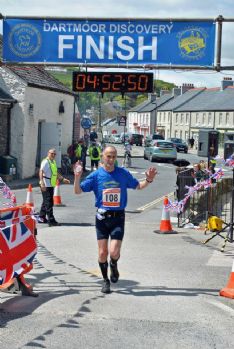