On Saturday 31 May, six days after running the Edinburgh Marathon, Peter Kirby, en route back to Devon, stopped off to run the “Blackpool Promenade 10 mile race”. The race was organised by the Fylde Coast Runners, and comprised of three traffic free, differing length laps of Blackpool Promenade.

Tracy Elphick took on the "outlaw half ironman" triathlon this weekend.It takes place in the national water sports centre in Nottingham. A 1.2 mile swim in the rowing lake was then followed by a 56 mile cycle around the scenic Nottingham countryside followed by a half marathon running course made up of two laps following the river Trent and the rowing lake.

It was crisp and fresh at the start with the sun rising over the lake but by the time she had finished it was really quite warm. Not sure what her actual time is because of chip timing issues, she does not show in the results at all. But the time by her watch which should be accurate is 5.32.36.

Can I just wish all the Teignbridge Trotters taking part in the "Dartmoor Discovery" on Saturday all the best and have a safe and strong run .Also to Chairman Roger and all his team of helpers and marshalls  behind the scenes and on en route in another successful Trotter event as without all their hard work there would be no race !

PHOTOs-Top- Tracy on the run at the end of the Triathlon  Middle -some of last years trotters at the Discovery   Bottom- Smokes and Chair 100th Marathon last year ! 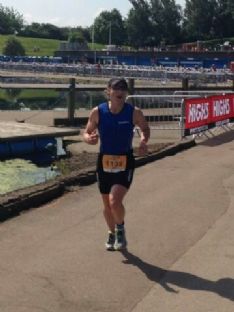 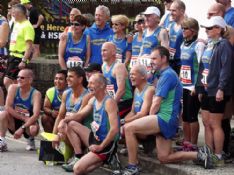 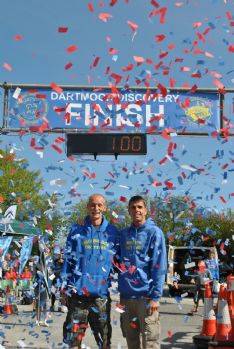