Teignbridge Trotters staged another successful edition of the ever popular Haytor Heller on Saturday 19th July, which is a tough 6-mile race based near the landmark Haytor Rocks, on Dartmoor.  This was the 29th running of the event, which was again sold out and saw 264 runners complete the tough, off road course in great running conditions.  The 6.30pm race start had the moors bathed in the evening sun and the course takes runners through some truly stunning, unbroken scenery.

The men’s event was won by Jamie Parkinson of Pudsey and Bramley AC in a fabulous time of 39:44, which is an average of 6:37 min/mile. Jamie won this event last year as well, so obviously relishes the challenges that the course has to offer as he shaved 14 seconds off of his time from last year.  John Nolan (unattached) was second in 43:11 and Neil Holmes (Erme Valley Harriers) was third in 43:32.

Teignbridge Trotters would like to say a special thanks to Buzz Terrill, as he was Race Director for the Haytor Heller again this year. This was Buzz’s 5th year at the helm but he will be standing down this year.  Buzz’s wife, Jean, has also been a great help over the years so thanks to both of them for all their support. 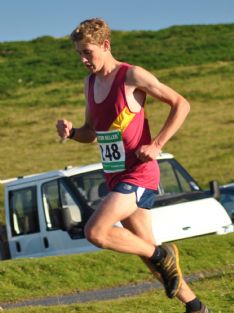 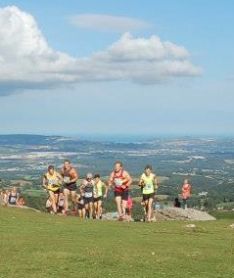