Several Teignbridge Trotters travelled to North Dorset Village Marathon on Sunday 4th May.  The event was high up in the Top 10 of UK marathon compiled by Runner’s World for 2013 and is very well organised by Gillingham Trotters.  Ran on lovely country lanes through some great scenery, conditions on the day were sunny with clear skies and many Trotters achieved some personal milestones for the marathon distance.

Sally “Marathon Queen” Ingledew was competing in her 135th marathon. She has been training very well and managed to get under the 4-hour mark for the first time, guaranteeing her a “Good For Age” place for London 2015. Sally’s time was 3:57:04.

Stuart Moulson said he had what, for him, was a disappointing run on this course a couple of years ago.  He put that experience firmly behind him this year as he managed a great PB with a time of 3:36:20.

Ruth Johnson also managed a PB, knocking 35 minutes off her previous best.  This is off the back of a 197-mile training month in April, and Ruth’s time was 4:22:32.

Jacki Woon recently broke the V50 10K and Half Marathon club records.  She also claimed the V50 Marathon record at this event with a fantastic time of 3:35:11 and also claimed first V50 prize.

Tracy Elphick followed up her PB in London 3 weeks ago with another very solid performance.  Tracy claimed first V40 at the event with a time of 3:31:34.


On Saturday 3rd May the National 100K (62 mile) event was held at the Cyclopark in northwest Kent, which is 2.1K in length.   This meant 48 laps were required to complete the distance and there is a hill on each circuit, which tests the mettle of the runners.   As well as being a huge physical challenge, it is also a big mental challenge and continuing his great form recently, Allen Taylor completed the event in what were very hot conditions.  Allen’s time was 9hrs46minutes. (There is a bit more about the event at the bottom of this report).

Keith Anderson competed in the Neolithic Marathon on Sunday 4th May.  The course is multi-terrain and takes in some of the views around Salisbury Plain and Stonehenge.  Official results aren’t out at the time of writing, but Keith managed a time of 4:10.

This event was staging various championships (Anglo-Celtic Plate, British Athletics National 100K Championship, Team GBR Trial for 2014 100K World Championship and a 50K event) and Steve Way broke the British Record at the event.  This is 3 weeks after getting a 2hr16min marathon at London where he was 3rd Brit home. Steve is an avid blogger and I think the content is suitable for all runners and it’s available below.

There is a bit of a backstory to Steve and his times, which I got from recent interviews on MarathonTALK.    Steve Way has a marathon time of 2:16:27 from London this year when he was 3rd Brit.   There is a Scottish chap (Simon Pride) who has this exact same PB from London in 2001 when he was also 3rd Brit, which was quite a big coincidence and something Steve Way was very aware of.   Making the competition that bit fiercer, Simon did hold the 100K record (6:24:05), which he did after London 2001.  Steve's 100K PB was 6:40 and he was after Simon’s record, which he claimed on Saturday with a time of 6:19.   To put this into context, that is about 6:10 min/miles…..for 100K! Mind-boggling!

There is a lot of information about his view of the race on his blog here:
http://www.steveway.co.uk/?p=1243

Top: A few Trotters at the start of North Dorset Village Marathon.
Middle: Sally “Marathon Queen” Ingledew on her way to her first sub-4 marathon.
Bottom: Allen Taylor on his 100K event. 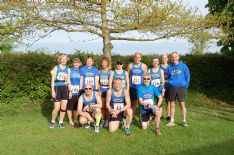