Trotters take part in events from Cornwall to the North East...

Geoff Davison, Tim Hartley and Peter Middleton travelled to compete in the annual Great North Run, which is one of Britain’s iconic annual races. This year’s race was a great spectacle for those watching on TV with Great Britain’s Mo Farah and Gemma Steel both claiming PBs at the distance. Farah was the first British man to win the event in 29 years, claiming a time of exactly one hour (I bet he’s secretly annoyed that he wasn’t one second quicker!), whilst Steel ran extremely well to finish in second place with a time of 68:18. On a day when the event was celebrating its millionth finisher, Geoff finished in a time of 1:58:28, Tim’s time was 2:29:52 and Peter’s was 2:34:48.

There were a couple of races taking part in Bridgwater, with Neil Pallant competing in the Bridgwater Half Marathon, finishing in a time of 1:49:48.   Although not a PB for Neil, he enjoyed the course but the weather was a bit too warm for his liking. It is a quite a fast course, with a mainly flat profile although there are a couple of inclines thrown in for good measure.

As part of the same event there was also a 5K race where Anna Langler donned her Teignbridge Trotters running vest for the first time to take part in her first ever official race.  Anna’s time was 40:04.

Sally Ingledew and Lance Mason completed The Kent Coast marathon (a half marathon was also on offer). The race started in Cliftonville with a loop around Palm Bay before following a largely coastal route through Broadstairs towards Ramsgate, heading back to complete the half marathon distance at Cliftonville. The marathon then continued through Margate, again largely along the coast, before turning at Minnis Bay and heading back to finish at Palm Bay School. The conditions were hot with Lance finishing in 3.05 for 6th overall. Sally managed 4.43.

Finally, on what was a busy weekend of racing, Katrina Zaple ran in the Treggy 7, organized by Launceston Road Runners. In hot conditions, Katrina managed a time of 1:13. It is a great race starting in Launceston town centre and ending in the picturesque grounds of Launceston Castle. The route was an undulating one, with a long steep hill at 3 miles that really tested the runners.

Teignbridge Trotters are again organising the Ladies 10K, which takes place on Sunday 14th September. This year the event is being dedicated to the memory of Dennis Milstead and entries to the race are being taken on the day. Full details of the race are available on the Trotters website.

Bottom:  Neil at Bridgwater Half. 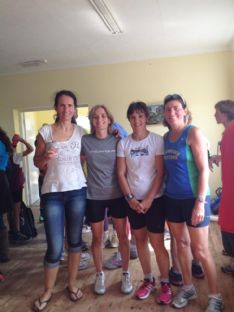 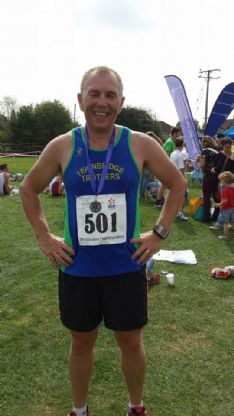