The Grizzly was held on Sunday 9th March, in what turned out to be near perfect conditions on the day. However, due to all the bad weather we’ve had this winter there were still some muddy, gloopy sections on this notorious course, which is organised by Axe Valley Runners.

The 20-mile event took the competitors over many large hills, ascents and descents, through deep bogs, across very muddy fields and of course the odd river or two. There is also a mile or so that is ran across a pebble beach that is a real test of stamina. On what was the warmest day of the year so far, the sun shone and there were some fantastic views out across the sea.

As well as The Grizzly and The Cub, there were also other events that Trotters took part in.

Lance Mason tested out his mental strength on his first track marathon at Telford Athletics Stadium on Saturday 8th March. Called “The Groundhog Marathon”, it's the second year of this event organised by Denzil Martin from The 100 Marathon Club and the conditions were near perfect except for a strong headwind down the back straight. 45 runners lined up for the 105 laps and Lance came in 3rd with a time of 3.04.


The Sidmouth Aquathon is the second in a series of four aquathons organised by Exteter Triathon club and was held on Sunday 9th March. Sharon “Fizz” Bowman and Sarah “Otter” Seymour completed the event in what were very good conditions. The event comprised of a 600m swim (24 lengths of the pool) followed by a 5K run. This was Sarah’s first race back after picking up an injury in August 2013.

Finally, Allen Taylor took part in the Imber Ultra in Salisbury on Sunday 9th March, which is a 33-mile off-road self-navigation challenge held by Avon Valley Runners. The course is held on rough and hard terrain and has an ascent of 3100ft passing through some of the most remote parts of southern England. Allen was 30th out of 80 finishers in a time of 5:25:58.

Top:  Trotters at the start of The Grizzly.

Middle:  Neil, Tamsin and Kirsty with 6 miles to go 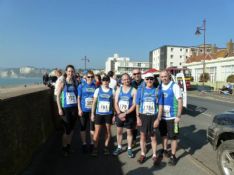 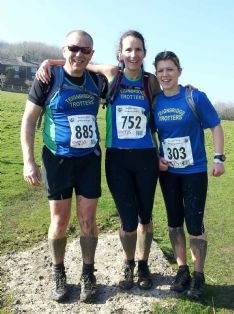 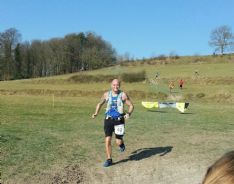