Trotters tough it out with Endurance this weekend.......

On Thursday 6th February ,Marathon Queen Sally Ingledew and Sharon Bowman travelled to Milton Keynes to take part in the fourth “Enigma Quadzilla” which is four marathons in four days.Unfortuately due to flooding the lake originally to be used ,Caldecott , was flooded and so the event sponsored by “Buff” had to change to Furzton lake which is about five minutes away from the other lake. This lakes length meant that runners would have to do 17 laps to complete the 26.2 miles of a marathon whereas Caldecott would have been seven. It was all completely off road and traffic free but with some muddy puddles and severe winds to contend with made the going tough for the runners. Thursday was the worst of the weather with torrential rain from around 2 hours in.
Sally who had done the event twice before completed the four days in fine form posting 4.19.51 (24th),4.22.56 (18th and first lady ) ,4.24.10 (20th) and 4.37 .Sharon who was totally new to the event completed in 4.47.55(38th),4.56.17 (33rd), 5.01.22 (39th) and 5.06 . 53 competitor’s completed Thursday and Friday with 58 on the Saturday and Sunday.
Each received a spinning medal for each day and a cherished hoodie with “I survived the Enigma Quadzilla” with Sally’s hoodie saying ““I survived the Enigma Quadzilla 3 times”.


On Saturday 8th Febuary, against a severe weather warning, Stephen "Ronnie" Barker completed the "South Devon Coastal Ultra Marathon" organised by "endurance life" as part of their coastal trail series. The course started and finished in Beesands, South Hams and followed the coastal path up towards the head of East Portlemouth before heading in land through the isolated and quaint villages of East Prawle and chivelstone.
Due to the severe weather the course was altered at the last minute, which took them back out along the coastal path and returning on a shorter route back making up the 32 miles, rather than the planned 35.7 miles. Endurance was the key to the run and to say the least the weather was against us from the outset. Running the first 11 miles in to strong head winds with gusts of around 70mph, Stephen wrote “I wondered what I was thinking of. I quickly realised that the wind was insignificant in comparison to the hail that took a layer of skin off any exposed flesh. Then there was the ankle deep mud that was determined to pull you down and hold you firm; however the freezing cold streams and floods focused the mind and drove you to battle through. That's before I mention the steep climbs and descents and the need to hang on to what felt like a cliff face, but let’s not even go there. This event coupled with the weather was definitely not for the faint hearted.”
He completed the course in 7 hours 13 minutes and 42 out of 52 competitors while husband and wife duo Ryan and Helen Anthony took on the half marathon distance and completed in 3.03.44 and 259th and 260th out of 295.Garry Smart was 4th in 1:40:52 and first vet 45.

On Sunday 9th February the next round of the “Brooks Cross country league” took place at Parke Estate in Bovey Tracey. The Teignbridge trotters hosted the event and then many of the marshals also ran it.The weather was a mixed bag and the ground tough going after all the heavy rain storms and high winds .

PHOTOS-TOP- Marathon Queen and her Princess-3 medals - one to go MIDDLE- Steve after Endurance life BOTTOM-Mark and John battle it out at Bovey Tracey . 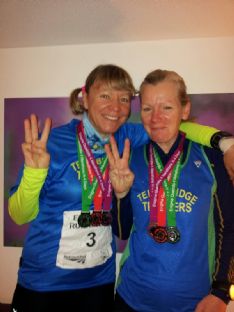 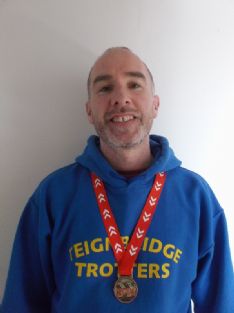 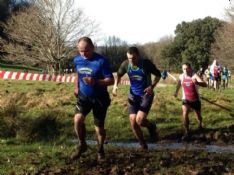