2016 gets underway with first race of the Championship. Mud, hills and marathons

Hungry seas have munched on sea defences, millions of nail-sharp droplets of water have pelted the countryside and howling winds have torn down vulnerable trees.

Yes, January has been anything but dry.

When the enraged weather fronts calmed down a bit, a sliver of sunshine peaked out from its hiding place to beam down on Devon and provide runners with respite from the rain so they could canter up and down dale.

Sunday January 10 was the first race of Teignbridge Trotters Championship: the Dawlish Coaster's Oh My Obelisk 11 mile (ish) multi-terrain monster. Starting at Dawlish Leisure Centre a ribbon of 211 runners took in undulating lanes before a quad-burning climb to Mamhead Obelisk - views ahoy! - before dropping back down to the start. There were, of course, a few nasty stings in the tail.

Bodies in blue hoodies peppered the start with some keeping them on to marshal while others bravely (or otherwise) cast them aside to reveal Royal Blues racing colours. Twenty-three club members lined up on the start line and went for it.

Tim Pratt led the Blues home coming eighth overall in 1:21.46. He was followed closely by Geoff Davey in 1:22.24, ninth, and Roger Easterbrook battled hard to secure third Trotter and 11th overall in 1:22.39.

It was a great start for the guys with Tim, Geoff and Roger taking home the trophy for first mens team.

Tracy Elphick led the Trotter ladies home and put in a strong-looking race to clock 1:40.18 and 71st overall.

*Mark 'Wurzel' Wotton smashed the club record for the most-run marathons in a year to claim the title in 2015. Wurz (for it is he) ran 39 marathons in a year in the 12 months just passed. His 99th was on New Year’s Eve, when many of the more sane among us were more concerned about parties, pints and Prosecco.

On Monday December 28 - basically that period between Christmas and New Year when we’re usually clueless about date and time - he travelled to Walton-on-Thames for the end of year marathon. The race started at the eXcel centre next to the Thames and headed along the tow path as far as the Moseley Lock and back - four times! He was 82nd out of 98 finishers in a time of 5.15.15.

On December 31 he (soberly) travelled to Essex for the Flitch Way Marathon which takes place at Great Notley Park. The race heads along a picturesque old railway line and through the village of Dunmow mainly on gravelled paths with some long very muddy sections to the half way point where runners U-turn and back the same way. He clocked 5.24.

He’s now resting until the mighty 100 marathon mark at the mighty Dartmoor Discovery on Saturday 4 June.

The Championship race up next is the Braunton 10 on January 24. Lock it in and get that Lycra dry. 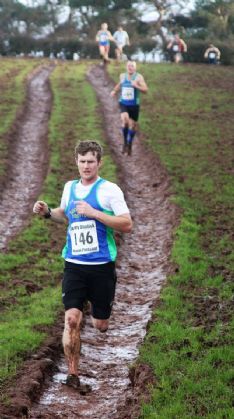