Richard Keatley travelled to Deal in Kent, to take part in a weekend double marathon, brilliantly organized by Saxons, Vikings and Normans Marathons. Richard had a very early start on the Saturday morning to travel to Betteshanger Country Park, where the marathons were staged.

Day 1 was a 13 lapper with a few climbs but nothing too taxing, and in cold but sunny conditions Richard finished in 4:37, which he was pleased with. On the final lap, runners carrier the St Georges flag to show people that they are on their final lap.

Day 2 was a tougher day and ran on a different course, covering 6 laps – Richard managed 5:05 on this course. Day 2 was cooler again, with some cross winds that made the conditions trickier. This event was called The Cakeathon where lots of cake can be eaten, and the medal is created with that in mind.

SVN are renowned for their great medals and goodie bags, and the picture here shows Richard with his two medals from the weekend, which takes his marathon tally to 29.

Derek Skinner was the only Trotter who travelled to Abingdon Marathon, in Oxford. In the 34th running of the event, the race has grown to become recognised in the running world as a good marathon to target if you’re chasing a quick time, and sells out quickly each ear.

Derek said he enjoyed the course, which is flat and starts and finished on an athletics track. Derek has done a lot of races this year and has picked up a hip injury so didn’t get the time he was aiming for, but was very happy to get around in about 3:50. Derek commented that he was in the most pain that he has ever been in a race, so said he needs some time off now to sort out the injury. Well done for finishing the race, Derek.

Richard with his two medals from the weekend 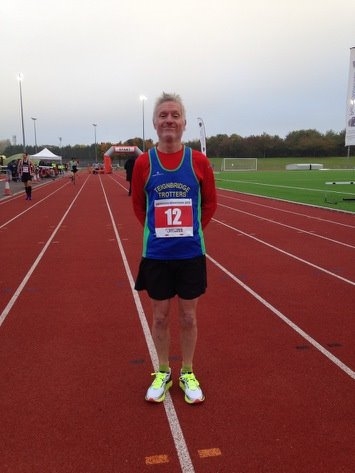