A fantastic weekend of racing; Trotters stage Totnes 10K, Richard completes 52in52, Kris runs a 6hr race, amongst other achievements 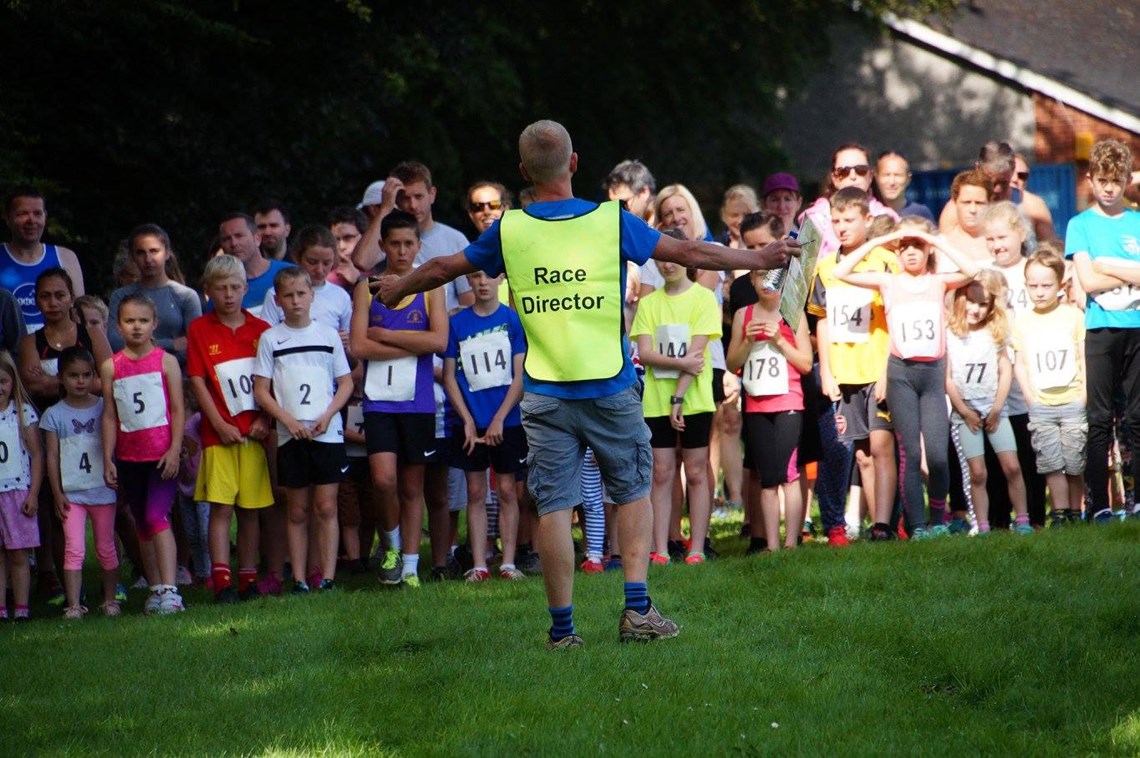 Teignbridge Trotters staged the successful Totnes 10K on Sunday 6th August. The event was sold out, and the course is nearly all off road and mostly flat, following the beautiful River Dart on tarmac, grass, and trail.

It’s the biggest race of the year in terms of participants that the club stage, and many Trotters helped out in various roles to ensure it went smoothly. Roger Easterbrook led the team, and also helped ensure the fun run for the kids was a massive success on the day. 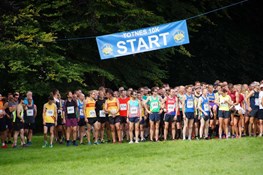 Richard Keatley reached a massive milestone on his way towards his 100 marathons, by completing 52 marathons in 52 weeks!

Last Monday & Tuesday saw him compete his 66th and 67th marathons, in Kent. Monday was the “Battle of Passchendaele” marathon, to commemorate one hundred years of the fall of so many soldiers during the First World War. At this event, there was a speech followed by a minute’s silence, then 6 laps of a hilly route around Kings Wood in Kent. The weather was a bit rainy in the morning for an hour then bright sunshine throughout the rest of the day. Richard’s time was 5:12:30.

On the Tuesday was the “Very British Challenge”, which was the same course of a six-lap route hilly and very pretty. Richard’s time was 5:29:32, in what was a hotter day than Monday.

It was also a very monumental and special day for Richard in his running career, as it was the culmination of attempting to complete 52 marathons in 52 weeks. Richard says he was really moved by the whole experience, as it took a lot of work to be able to complete this special challenge.

After all that, Saturday was then a trip back up to Surrey to complete his 68th marathon, which was along the Walton on the Thames, where he completed the marathon in 4:45. He was presented with his 52in52 marathon accolade in front of many marathon runners - a very momentous occasion for Richard. The race itself was on a hot day but last year Richard completed two marathons in a day here, so it was important for him to achieve the 52in52 club at this event. Richard has been accepted as a Trotter into the 52in52 club, and is the only one in Newton Abbot to do so. 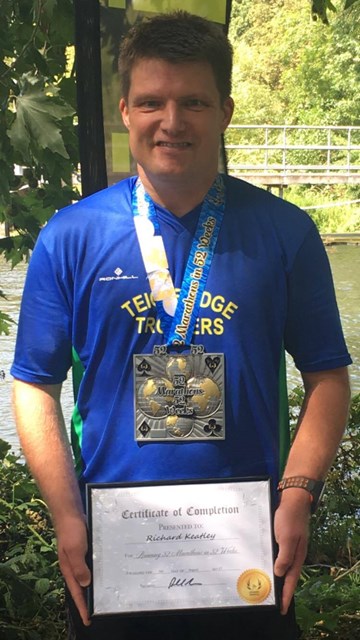 Richard with his 52in52 medal and plaque 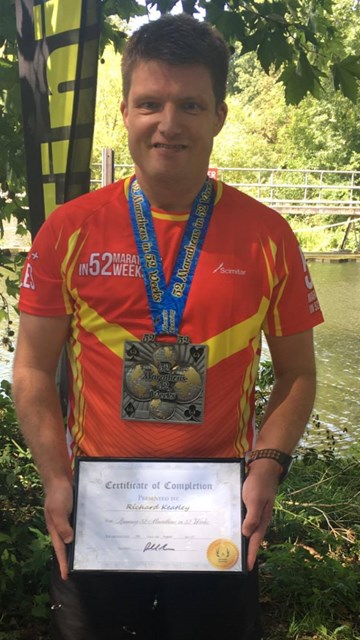 On Saturday 5th August, Kris Ward travelled up to Walton On Thames for the Dark Phoenix 6 hour race organised by Phoenix Running.

The idea was to see how many 3.3-mile laps could be completed in the time, with participants being able to do as little as one lap to qualify for the much sought after bling they dish out.

Kris managed to complete 12 laps totalling distance of 39.6 miles in a time of 6 hours 3 minutes 55 seconds.  He also had the second fastest time of the evening at the marathon point, with a 3:44.  Most of the competitors called it a day at the marathon point, and Kris was the last man standing.  He commented that it was the hardest thing he has ever completed, as ticking off the laps was tough.  But Kris was rightly pleased with his result.

The weather was lovely but a little hot until the sun set then it was perfect conditions.  However, it soon got dark so head torches were required for the last 3 laps, hence the name of the race; 'Dark Phoenix'. 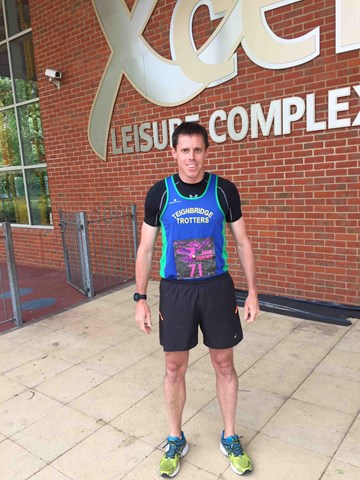 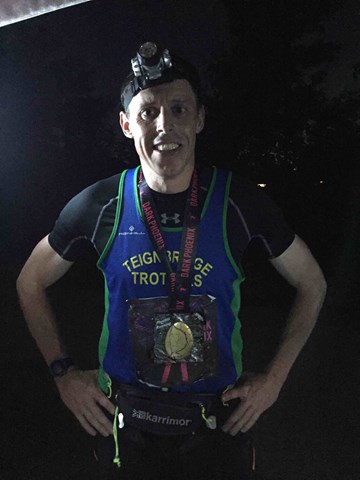 On Sunday 6th August, Graydon Widdicombe travelled to Gloucester, to take part in the Gloucester City Marathon. The course is picturesque and very flat, and Graydon completed the course in 3:58.

On a warm Friday evening, a hardy bunch of Trotters met at the Sandygate Inn to compete in the second annual “Heavyweight Challenge”, the idea being that each runner competes at the same weight.

Sadly, reigning champion Mark Walker was unable to compete due to injury but Dave McMorrow and Rod Payne had clearly been in hard training and set the times to beat.

With up to 30kg being carried by the lighter Trotters it was a hard 1/2 mile indeed and runners more used to running marathons struggled to complete the short course.

On Tuesday 1st August, three Trotters travelled to Exeter to take part in the fifth round of 2017’s Run Exe 5K series. The series is made up of six races, with the final one taking place on Tuesday 5th September. The course is basically pancake flat, being run along the footpaths and cycle tracks around Exwick Playing Fields and the River Exe Flood Relief and attracts lots of people chasing PBs, as well as novice runners.

Peter Heckles was the first Trotter home for 18th position with a great time of 17:57, which was a PB for Peter. Graydon Widdicombe finished in 20:36 for 53rd and Hannah Jones finished in 21:51, which was her second time under 22-minutes, for 71st. Second claim Trotter, Hylda Stewart, is returning from injury and finished in 27:46 for 100th position. There were 103 competitors. 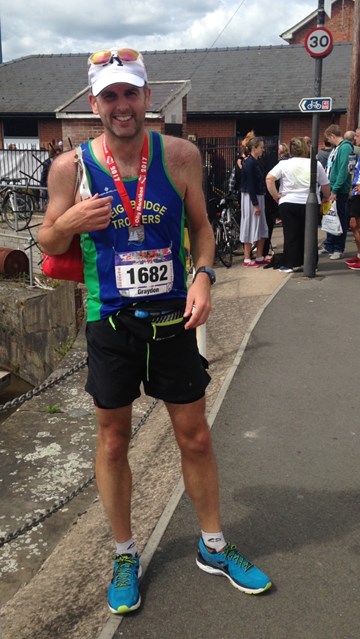 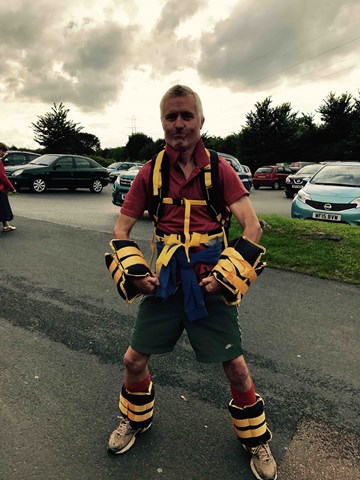 Del at the Heavyweight Challenge

Martin Randall and Louise Gentry took part in the Indian Queens Half Marathon on Sunday.  It was a well organised and marshalled undulating out and back route, on roads and tracks. Conditions were warm but a fresh headwind in the second half kept it from being too hot (although that combined with the last mile and a half up hill sapped the energy somewhat!). Martin was running only his second race in the last year, so was happy with his performance overall and would certainly return next year to beat his time!

Meanwhile, Annika Longthorpe ran Sturminster Half on Sunday, which was her first official run for the Trotters. Annika came 67th over all out of 253, 6th woman, and her time was 1.39.40.

Thanks to everyone for the contributions on what was a bumper week of racing! 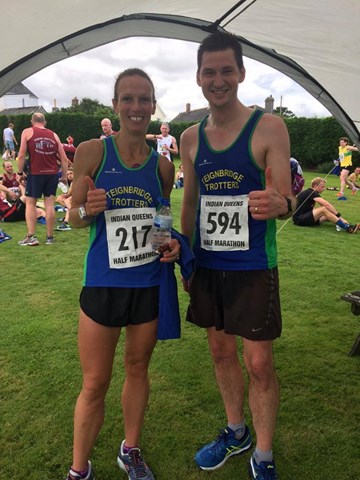 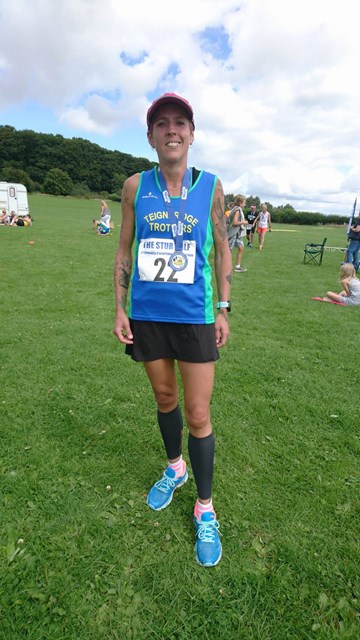 Annika in her new Trotters vest