Another weekend, another record smashed!

On Wednesday 20th June, Susanna Goffe and Lucy Evans to a trip to just outside Princetown for the Summer Solstice Fell Race. The well organised, low key event is put on by the Tamar Trail Runners and consists of a tough 5 mile run on open moorland. Weather was not in their favour though and luckily the mist lifted enough for the race to go ahead. 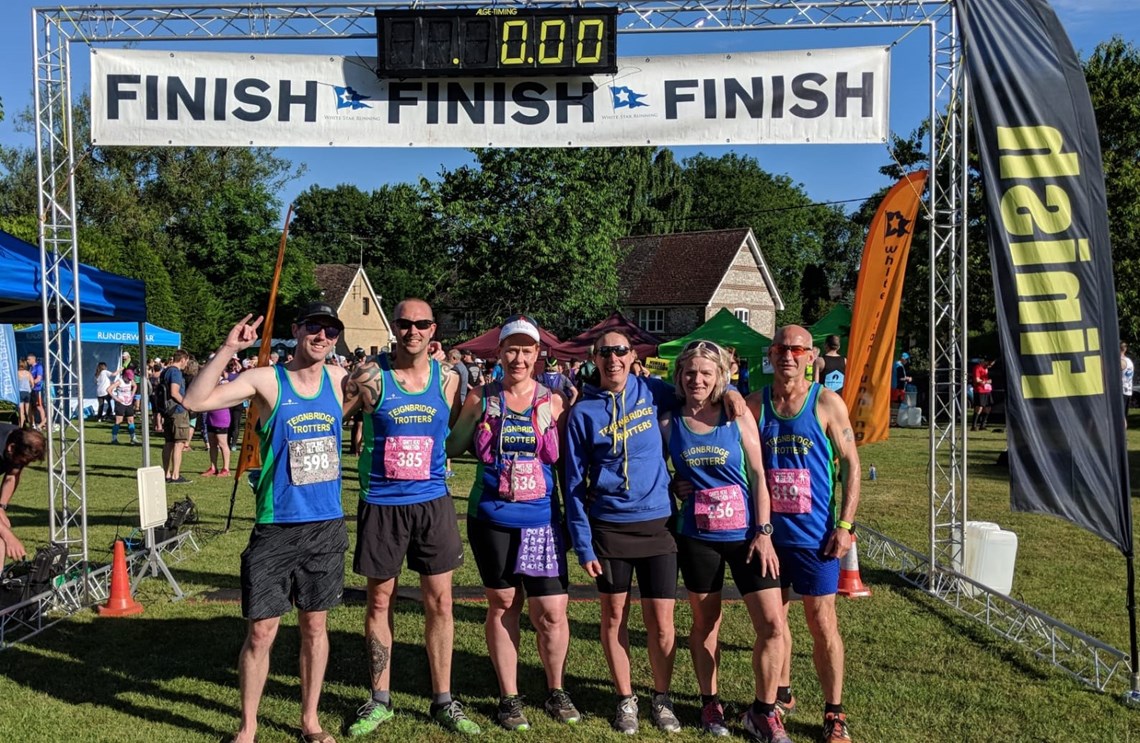 Trotters at the Giant's Head Marathon 2018

The marathon route took 465 runners through the beautiful Dorset countryside. Known for being a very challenging course, with 3000ft of elevation gain, the runners ran through the beautiful village of Sydling and the Cerne valleys - running right under the Cerne Abbas Giant. Even though the race started at 8:30am, the temperature was quickly rising with highs of 25oC during the day.  A brilliantly organised event albeit with a couple problems during the day - including a slight detour for some runners but the sense of achievement once the finish line was in sight made it all worth while.

Originally, all 6 trotters were signed up to the marathon distance however, due to injury Lucy had to drop down to the 10k distance. Daryll also dropped down to the hill race due to lack of training. The 10k race started at 10am with the sun already blazing. After a village start, the 290 runners were faced with the first big ol' sweaty hill! Daz & Lucy's cheers were a welcomed when the other Trotters crossed the finish line!

One of Devon’s toughest off-road marathons (if not the toughest) this is a half marathon or marathon in North Devon's Area of Outstanding Natural Beauty. Woolacombe Bay is the centre point and runners follow a figure-of-eight around stunning coastal scenery and inland trails, taking in the scenery of some of North Devon's most beautiful beaches and coastal villages including Baggy Point, Croyde Bay, Morte Point and Lee.

The route is very challenging with 1,300ft of ascent for the half marathon and 3,300ft for the full marathon.

He clocked 3.55.03 to take home his age category prize and fourth overall.

Many struggled with the heat and welcomed the extra effort the marshals went to with sponges, food, water and other refreshments at regular intervals. Jim Donovan showed the grit he’s known for by plugging away to finish 99th in 5.31.02. In total 162 competitors completed the 26.2 distance.

Emma Donovan ran her favourite distance, the half marathon. Having suffered an calf strain recently, she was pleased to finish in 2:50.33 for 303 out of 403 runners.

All finishers received a technical tee, medal, cream tea and an optional dip in the crystal clears waters of Woolacombe Bay. 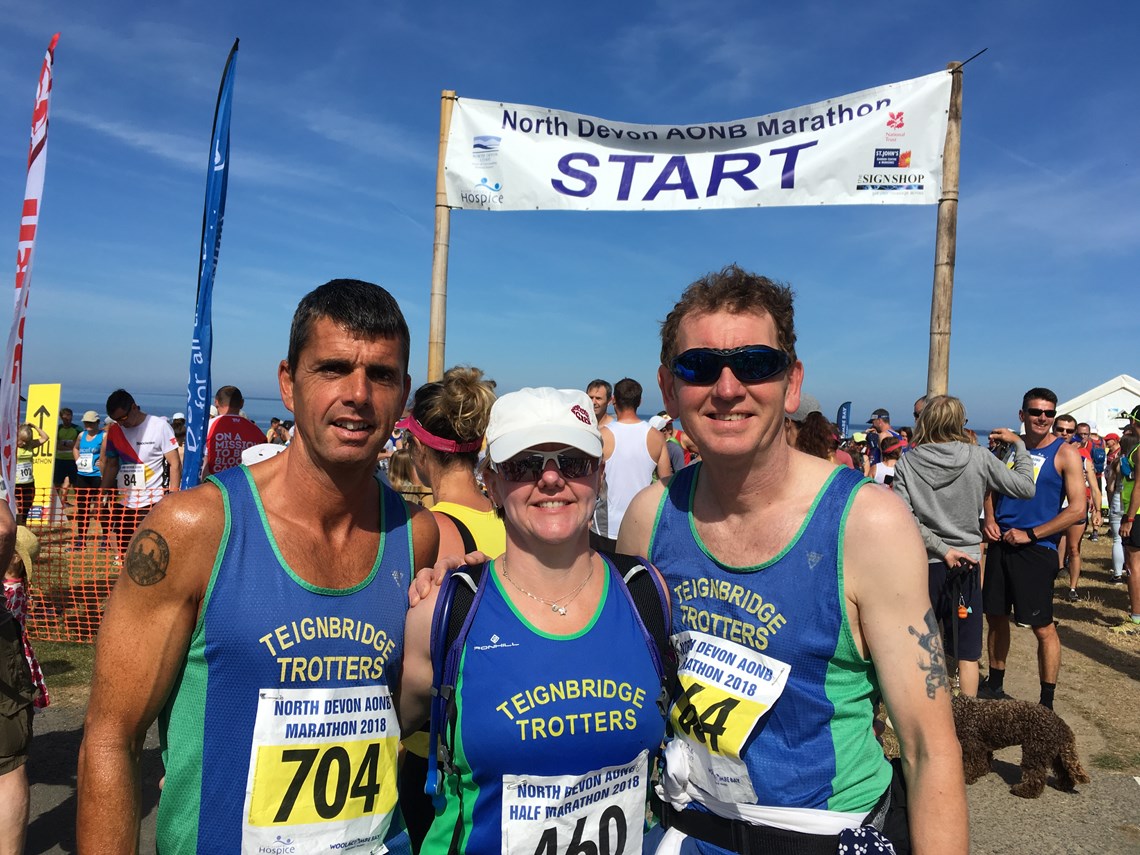 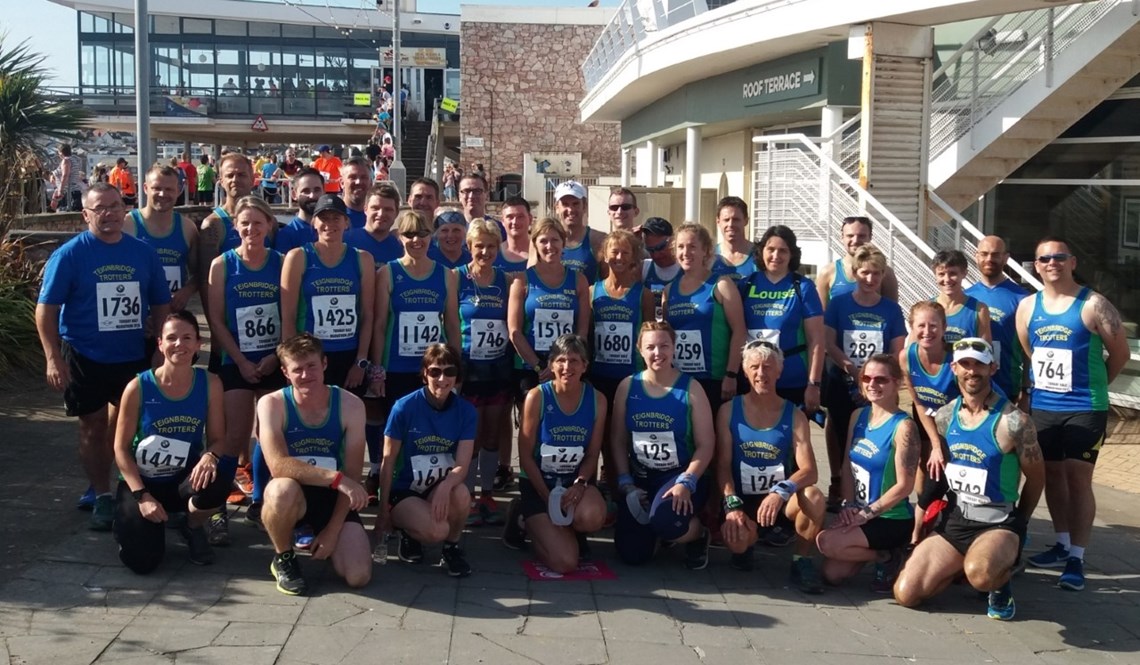 Trotters at the Torbay Half Marathon

Sunday also saw the return of the popular Torbay Half Marathon. This seaside event consists of two laps which starts and finishes on Paignton Sea Front.
The traffic free road race is part of this year's Club Championship so was heavily attended by Trotters - a fantastic 40 Trotters took part.
This event was a milestone for several members - including Miranda Stone who made her Trotter debut and achieving a half marathon PB by finishing in 02:02:23.
Susanne Westgate ran her first half marathon. Being relatively new to running and a new member of the Trotters she was quite nervous on the start line but is grateful to the advice she received from fellow runner Caroline Clark and the encouragement from Sharon 'Shaz' Sharples during social runs and at training nights.
Paul Dainton donned his Trotter vest after a four year absence - taken back by how big the club has got since he left, but not surprised by the outstanding commitment and support offered to one another during the event. After a fantastic return to running in April, Rachel Pallant took on the half marathon distance having not ran this far in over two years. Taking part in his first race since January with no training, the Torbay Half also saw the return of Josh Taylor who was very pleased to finish in 1:51.

The Teignbridge Trotters pride themselves on being a running family for all it members but the Blakesley's took it to the next level this weekend. Elizabeth Blakesley ran her first ever half marathon - raising funds for local charity 'Frazer'. Her brother Jordan and sister-in-law Caron came down from London to run with her; so not to be left out Dad,Peter, and Mum, Angela, ran it as well!

The tough half marathon saw PB's for Sarah Pike, taking 2 minutes off her time from last year and finishing 2nd in her age category; Kathryn Steemson, knocking off 5 minutes; Emma Ray beat her previous time by a staggering 7 minutes and Kim Knight - beating her previous time by 2 minutes. Jacki Woon won 1st prize in the FV55 category and broke another club record by 16 minutes at the same time!
Kevin Woodard was first Trotter home , finishing in 15th place and grabbing a PB at the same time - knocking 2.30 off his previous time. 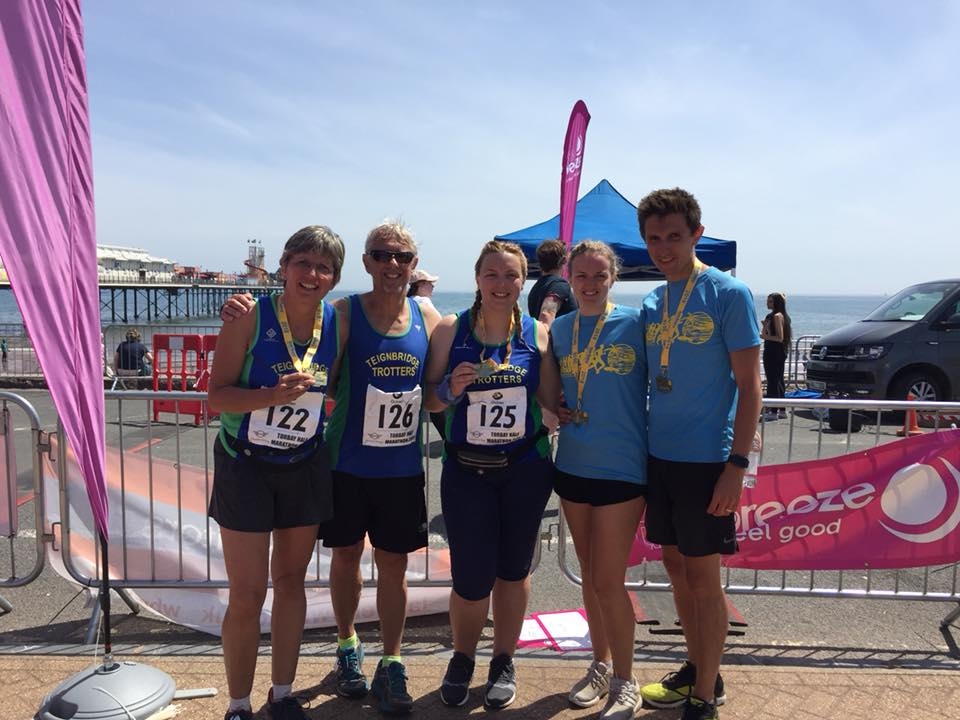 The Blakesleys at the Torbay Half Marathon