A mud run, a couple of marathons for Richard and a great 10K for Pete

The first obstacle is the initial water hazard, thigh deep, designed to topple gung ho runners. Then came patches of mud knee deep, sand, more water, before a climb up to the turning point. The 150 competitors were spread out, with a few bodies laid out by the slippery conditions. In warm and sunny weather the return leg was all about toughing it out, like a true Trotter. The water hazard again had the spectators howling with laughter, before the upward slope to finish with a free Red Rock pint of ale.

Hats off to Tamsin Cook and Phil Norden, Mel Dunn who won the prime ladies category, and Roger who won the MV40. Smokes didn't fancy getting his shoes dirty and stayed ashore with beer in hand, whilst Adam Johnstone showed up late, perhaps fearing as a local that he may have romped it!  The event had a great atmosphere, raising money for a worthy cause.

Pete at the finish of his 10K

Pete Hayward was the sole Trotter who took part in the Melksham 10K, which is held in Wiltshire. The course was a two-lapper, mainly around town on footpaths, with great support from the marshals.

Richard Keatley continued on his marathon journey, completing marathons 23 and 24 - the Beerathon at Ranscombe Farm in Kent.

The event consisted of 7 laps through woods and country lanes, and the weather was overcast and cool.

Richard really enjoyed the event, trudging through conkers that were already down on the ground. Richard says that he only had a few beers on the route, but not too many!

Next up was Coyote Marathon, held at the Clyopark in Kent and the weather again was overcast with no rain. This was a 21-lap affair with great atmosphere and loads of support on the route, although each lap there was a hill to climb, which tested the mettle of the competitors! Richard was happy to get sub 5 hours again the day after Beerathon.

Thanks for the contributions from Pete, Roger and Richard. 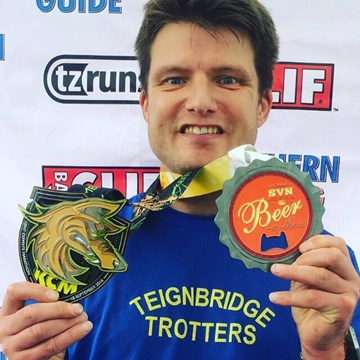 Richard with his medals from the weekend