A Trio, nay, a Triumvirate of Trotter half-marathon successes and much, much more!

We Trotters certainly get around: at the weekend Paul Johns was in Poland, completing the Warsaw half marathon in 1.49.21, comfortably within his target time of 1h 50min. The race started in the famous 'Three Crosses Square' and headed through the picturesque Old Town before crossing the River Vistula to Praga, passing through residential areas then back over the river to central Warsaw. Much of final three miles passed through a pleasant and shady park. The course was mostly flat with the exception of a nasty little hill near the finish. Paul was placed a creditable 4267th out of a field of over 14,000.


Closer to home, Martin and Jo Randall ran the Bournemouth Bay half marathon, organised by the British Heart Foundation as a fundraising event. Jo ran with her father and finished in 2.12, while Martin clocked a creditable 1.32.


Five intrepid Trotters took on the Exe to Axe race, a gruelling twenty-mile run along the steep and muddy South West Coast path from Exmouth to Seaton, organised by Sidmouth Running Club. The course involves a number of challenging hills and lots of steps. Strictly a fell race, this was a self-navigating event without marshals, although there were some strategically placed signs to help runners find their way. Conditions underfoot were good (not too muddy!) and the weather was kind. Stuart Moulson, 76th overall, recorded a very respectable time of 3.56.15, with Jimmy Donovan 123rd in 4.18.45, Neil Skinner 162nd in 4.43.49, Eleanor Taylor 181st in 5.03.54, and Ryan Anthony 187th in 5.09.33.


Richard is building up his marathon account, having completed nine including Taunton. He has done six in the last four months and is setting his sights on the magic 100 total. Prior to Taunton he completed the Codopoly 28 miler, an undulating run based at Coalport, Shropshire and organised by How Hard Can it be Events, finishing 18th in 5 hrs 49 min.

Pictures of Paul Johns, Ryan Anthony (with Mandi Burroughs of Fit2Run) and Martin and Jo Randall stolen and used without permission. 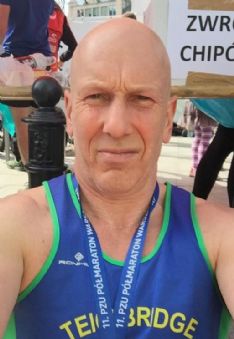 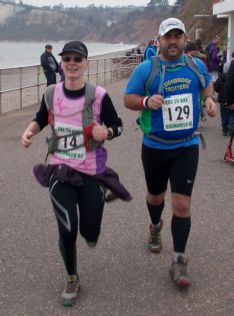 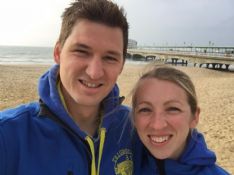