A very busy weekend for Trotters far and wide; Jacki breaks her own club record, and Kevin claims his first race win

On what was a busy weekend for racing, many Teignbridge Trotters travelled far and wide to take part in multiple events.

As well as racing and training, Teignbridge Trotters are also renowned for their social events and this weekend, a few ladies travelled to Bath for a bit of R&R and a weekend away. The ladies enjoyed a house in a central location, sightseeing, spas and lots of prosecco, and a few then took part in the Bath Half Marathon on Sunday 13th March. The weekend was superbly organised by Helen Anthony and definitely brought everyone closer together. They are already thinking about about where to go next year.

A few Teignbridge Trotters took part in the tough off-road race, The Grizzly, which was the 29th running of the event on Sunday 13th March. It is brilliantly organised by Axe Valley Runners with fantastic supportive marshals and spectators, ample drink stations, snacks, music and cheering. The race was the usual, constant 20-mile slog of hills, mud, bogs, streams, shingle beaches and merriment, with over 3500 foot of ascent. Mile 15 is a treat with 'the stairway to heaven', which is a tortuous uphill cliff path that goes on for about a mile with a photographer expecting you to give him a lovely smile not far from the top! You then have a slightly easier 4 miles into the well-deserved downhill finish with cheering spectators. To top it off, the runners had a fabulous, calm, sunny day. Full results are Paul Sharples (3:22:21), Stuart Moulson (3:26:28), Derek Skinner (3:36:27), Colin Harper (3:32:17), Louise Gentry (3:39:06), Dermot Smyth (3:48:46), Dave McMorrow (4:08:57), Ruth Johnson (4:29:00), Lorna Martin (4:33:17), Kim Bindon (5:11:32) and Mark Wotton (5:11:33).

Three other Trotters travelled to Dorset for the mainly off-road Larmer Tree Trail Marathon, organised by White Star Running. There is only about 3 miles of road, with the rest being ran on trails and country lanes, and a scattering of very large hills. Aid stations included a station with cider, wine and vodka, alongside cake and the usual salty nibbles. Ian Langler finished in 4:32:39, Richard Keatley did 5:48:59 whilst Sharon Bowman chalked off her 41st marathon in a time of 6:06:44.

Finally, Lance Mason and Sally Ingledew travelled to Barcelona for the marathon. On what was a tough day at the office for both of them due to illness, Lance still managed a time many would be proud of with a 3:35:50. Unfortunately, Sally had to DNF, but our Marathon Queen will undoubtedly bounce back.


Thanks for the contributions from Sharon Bowman, Ruth Johnson and Emma Pearcy.

First picture: Ian, Sharon and Richard before the start of the Larmer Tree Marathon.

Third picture: Tracy Elphick on her way to her PB at the Granite Way 20-miler. 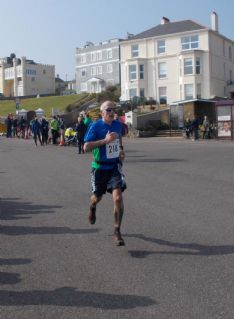