Another successful year reported at the clubs AGM ...

The recent Teignbridge Trotters AGM saw the club agree to move to a new venue for their training HQ. Since the club was formed in 1982 they have trained from Newton Abbot Leisure Centre, or Dyrons as it was known then, before moving to Coombeshead College in 2011 and for the past year, at Teign School. As from the 13th April, the REC (Newton Abbot Recreational Trust) will become the club’s permanent new home. Club Chairman, Roger Hayes, said “We’re thrilled to be moving to the REC. It’s got fantastic facilities and is central to the area, offering some great training routes”.

That wasn’t the only change to happen as a result of the meeting. Mark Becker, having been club secretary for nine years, stood down from the position and Liz Barnett was elected as his replacement. Club President, Jose Waller, presented Mark with a specially engraved tankard for his dedicated service to the club. It was then a case of a role reversal as Mark was elected as the new President, replacing Jose, a position he will hold for the next three years.

During the meeting it was noted that the club had 296 members, which was one member short of equaling the all time record. Club training nights were proving very popular, with a wide range of sessions on offer. There was something for everyone, from complete beginners to the most experienced runner. The coaches were thanked for their fine efforts, which helped many members gain PB’s during the past year.

The club have a proud record of raising money for charity. This was highlighted by the Treasurer, who informed the meeting, that during the past 12 months the Trotters have given over £3000 to various local charities.

The club stage five races each year, as well as hosting one of the races that form a part of the Westward League Cross Country series. The clubs five races are the Dartmoor Discovery Ultra Marathon, Haytor Heller, Totnes 10K, Newton Abbot Ladies 10K and the Templer Ten. All of them were hugely successful and proved very popular, attracting over 1900 runners between them.

Anyone wishing to join the Trotters is encouraged to come along and try out a couple of sessions first. They meet every Monday and Wednesday evening at 7pm. Further details can be found on their website; www.teignbridgetrotters.co.uk

Jose presenting Mark with his tankard 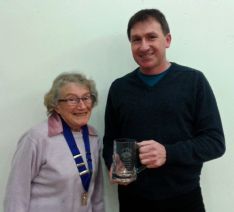 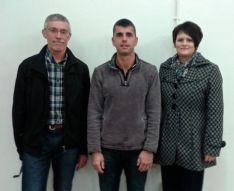