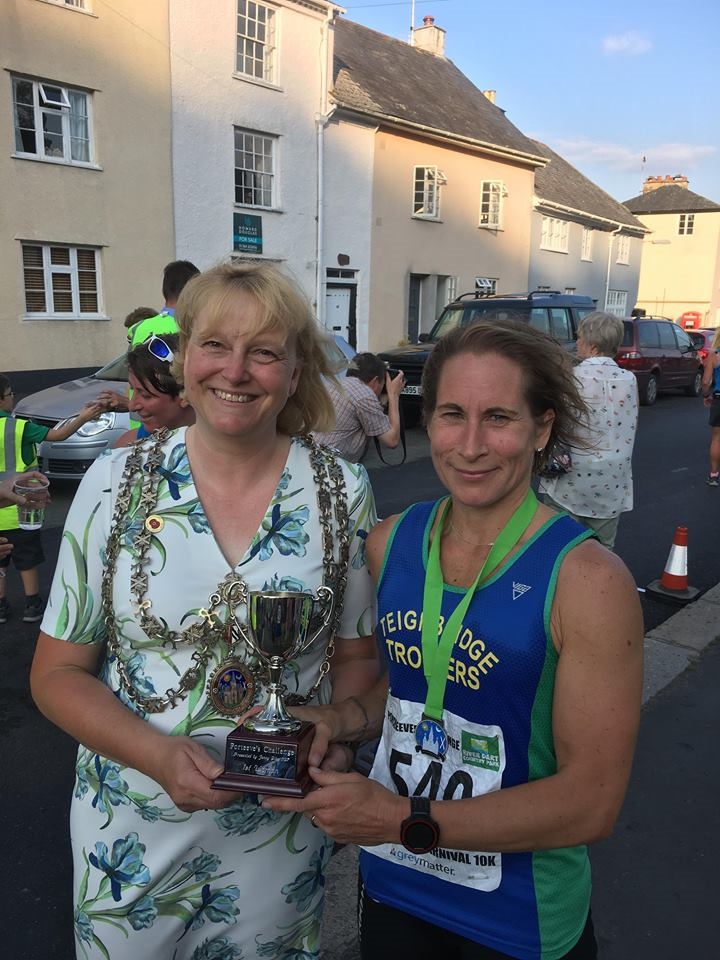 On Thursday 5th July, 12 Trotters took part in the inaugural Ashburton Carnival 10k ‘The Portreeves Challenge’. Starting and finishing in Ashburton outside the Bay Horse pub, the single lap race was undulating with one reasonably steep climb at about 4K. Conditions were hot with a slight breeze now and then and the tree cover provided quite a bit of shade which helped. The support for the first event was fantastic.  Tracy Elphick ran in as First Lady. Her first 10k victory. Kim KNight was also delighted with her 5th lady position - not a PB for Kim but she really enjoyed the event - a particular highlight was running through River Dart Country Park.

10 Teignbridge Trotters teams took part in the Erme Valey Relays on Friday 6th July - 6 men’s and 4 women’s teams. With 4 people in each team, each person ran 2.5 undulating miles around Ivybridge lanes on a hot evening.

Stand in men’s team captain, Roger Hayes, was thrilled with the effort put in by all those that took part. He went on to say ‘The hot conditions didn’t seem to dampen the team spirit, there were some excellent performances, none more so than Tim Pratt who registered the fastest time by a Trotter, finishing in 13:44. Our MV50 team just missed out on first place, coming second to a very strong team from South West Road Runners. Hopefully we take revenge at the next relay event which is being held at the Torbay Velopark in Paignton on 24 August’.

The FV45 team was led by Mandy Wheeler, the fastest female Trotter on the night in 16:22. She was ably followed by Kathryn Steemson and Kim Knight. Women’s Captain Eleanor Taylor wondered whether last leg runner, Tracy Elphick might be tired after being first Woman to cross the line in Thursday night’s Ashburton 10km race. But no, in 17:01, she was 2nd fastest female Trotter on the night and the Trotters were 1st FV45 team. Perhaps spurred-on by the fact that the prize was a bottle of wine – each.

In a time of 17:37, 3rd fastest female Trotter on the night, on-form W55 Jacki Woon led the FV55 team. They achieved 3 place in their category.

Last year this was Becky Harvey’s first race. This year, she ran this tough route in 17:46, beating last year’s time by 3minutes.

The post-run refreshments - coffee, or beer and chips - were much appreciated by many of the participants and the Trotters who’d come along to support them. 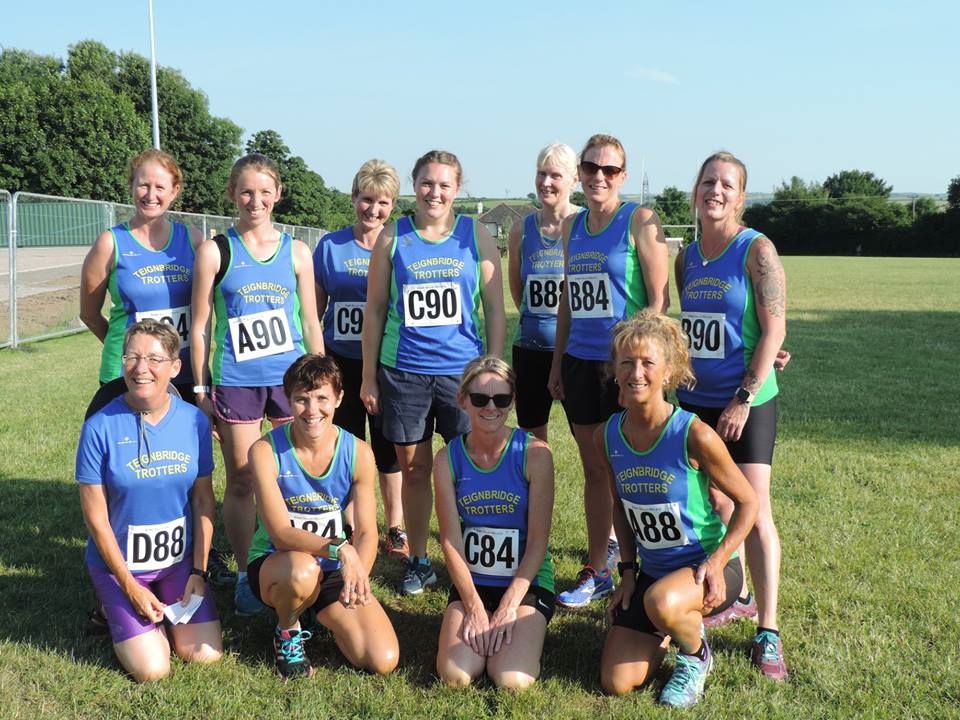 Some of the women at the Erme Valley Relays

This event was organised by Albion Running who also offer an 100k option too on the same day. The 50k started at Ham Hill Country Park in Somerset following the Liberty Trail to Lyme Regis in Dorset. The route is predominantly trail with a couple of road diversions this year running through Wayford Woods, Lambert's Castle and a number of pretty villages with a total climb of 3586 ft.

This was a ice low key event with approximately 100 runners organised by the Greenbow Running Club.

Setting off from The Twisted Oak in Ide in three separate waves, each seperated by 3min intervals. Gavin Forbes, Kate Williamson, Kev Sampson, Lucy Evans and Emma Ray all set off together on the (relatively) self navigated course which is run around the Exeter Green Circle. It was hot!!!
The course had a few lumps and bumps along the way and took in some amazing views of Exeter that many probably don't even know exist, we certainly didn't!! It was hot hot hot!!!

As this was self navigated, a couple of wrong turns were taken but this just added to the adventure of the race. Towards the end, Gavin, Kev and Kate had pushed on ahead from Lucy and Emma but as we took another 'slight detour' we actually crossed the line just behind them. It was blooming hot!!!

This was a fantastic race and was not about finishing times but finishing lines. Those that took part in this event said it was well organised, a really good fun event and a lovely run. It is already in Gav's diary for next year and he would encourage others to give it a go.

Thank you to Gav for the report - and the weather updates! 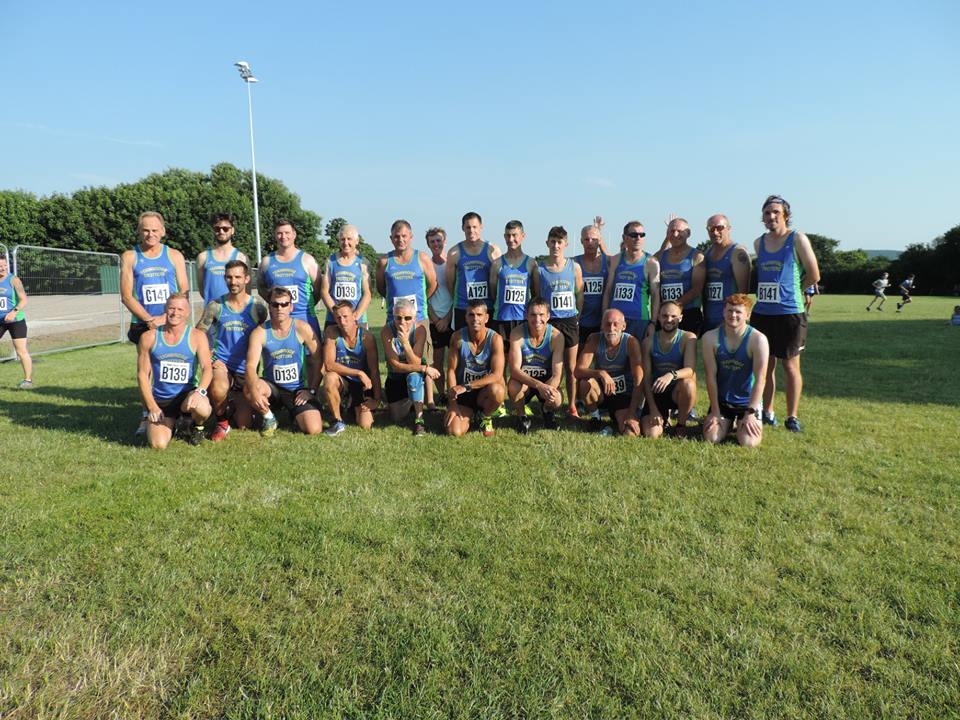 This years Frolic was well attended yet again with the Trotters braving the incredible heat. This off road White Star Running event consists of 6k hilly laps through waist high corn fields, open tracks and beautiful private land. This event, like many, if not all WSR events includes the ever popular LoveStation with Fernandos Disco halfway round serving snacks, cold water hugs and, of course, cider.

The aim of this event is to do as many, or as few, as you like either solo or in teams (with a squeaky pig as your ‘baton’). 6 Trotters ran as solo runners whilst 2 others ran as a pair - alternating between laps throughout the day. Mark Walker ran 2 laps and managed to support England in their victory!

Lance Mason achieved the 3rd fastest lap throughout the event - completing his first lap in just 00:29:05 - we went on to complete an additional 6 laps to finish in 05:11:05.

Fantastic effort - and a fantastic event! 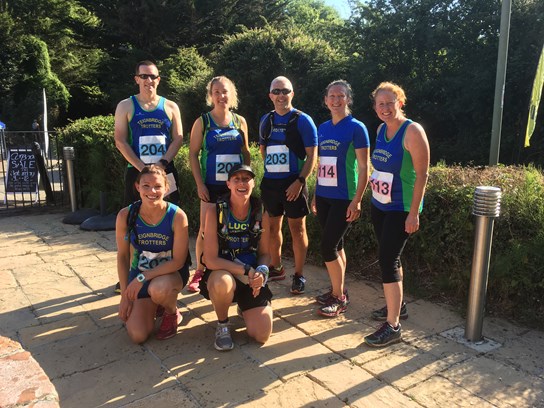 Trotters at the Greenbow Half... Ish 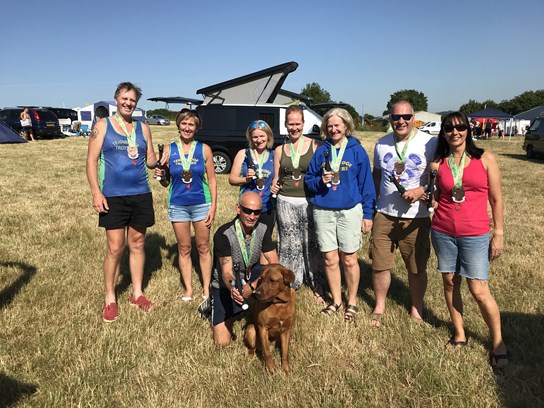 Trotters at the Cider Frolic - with Ziggy!