Axminster Challenge, the Trottettes take on Cardiff, a Half Marathon and a Marathon

A team of twelve Teignbridge Trotters took on one of the biggest road races in the U.K.

Personal bests and club records fell at Cardiff half marathon on Sunday October 2.  A whopping 17,110 runners crossed the start-line – a new event record – confirming its place as the UK’s second-biggest half marathon and the third-largest road race behind the Great North Run and the London Marathon.

The route takes runners past the capital’s most iconic landmarks and historic buildings.  The predominately flat and fast course makes it ideal for beginners and elites.  The race starts outside Cardiff Castle and runners then head down past Cardiff City Stadium on the way to Penarth.  They take in the Penarth Marina before crossing the barrage and heading to Cardiff Bay.  Runners run right through the heart of the bay taking in the Millennium Centre.

The day dawned bright and sunny making it more akin to a summer's day with temperatures to boot.  For some, this made it more of a challenge particularly those chasing a personal best and racing hard.

The course then heads towards the north of the city and runners complete a loop of the Roath Park Lake before a grandstand finish in the heart of the city at the Civic Centre.  Cardiff certainly likes to have a good time and the support along the route was loud, fun and encouraging.  In what's becoming a bit of a 'thing', a group of Trottettes made a weekend of it.  This was their second tour having visited Bath earlier in the year. 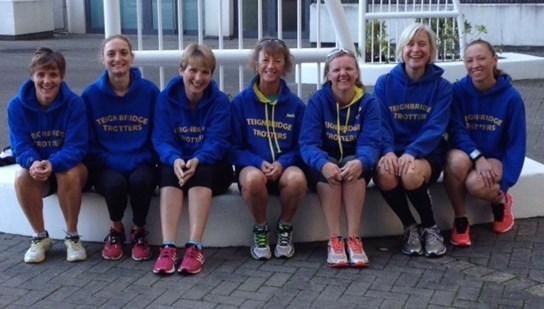 Helen Anthony led the Royal Blues home in 1:27.14.  Jacki Woon ran a strong race for an amazing fourth place in the F50-54 category clocking 1:35.59 breaking her own club record for that age category too.  Mandy Wheeler ran a gritty race posting a time of 1:37.36 and Hannah Jones clocked a very convincing new personal best with her time of 1:43.07.  Sarah Schutte ran her first half marathon race in three years posting a great time of 1:47.56 and Clare Youngman dipped under the sub 1-50 mark in 1:49.44.  Vicki Ratcliffe ran a superb race, clocking 2:02.19, shaving 13 minutes off her last half marathon race.  Mens captain Lance Mason and Sally Ingledew - more often seen at races that cover double the distance - ran together in 2:03.14.  Emma Pearcy enjoyed a return to the big city racing scene clocking 2:10.10 and is now looking for a spring half to target.  Caroline Clark used the race as a training run and change of scenery, posting a time of 2:20.29.  Cardiff was Tracey Jolly's debut half and she clocked 2:22.00.

A team of Trotters took part in the Axminster Challenge, which is a hilly, off-road, 8-mile race. In brilliant running conditions, the route comprised bridleway, farm track and fields, with plenty of stunning East Devon scenery.

The mud was manageable and the event was really well organised by Axe Valley Runners, with plenty of marshalls out on the route, and the organisers also put on a shorter distance race for kids.

The final 500m featured a hill, but as the picture of Sharon Bowman demonstrates, it wasn't too much. In summary, this was a great running route, well organised and cheap to enter, and Paul Sharples won 1st MV70 whilst Roger won 1st MV40.

Peter Hayward took part in the Cricklade 10K, near Cirencester and 278 runners completed the undulating, single-lap route of the Cotswold countryside. He had a great run as he shaved some time off his 40+ 10K PB, finishing the race in 45:32 for 45th position. Pete was raised in the area and as this race has been successfully staged for year, he commented that it brought back fond memories from his early running days. Great running, Pete! 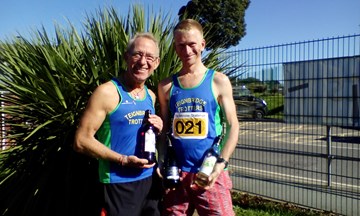 Paul and Roger with their prizes 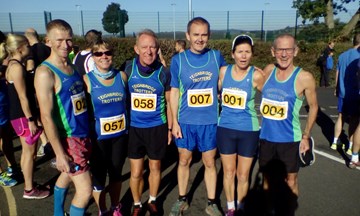 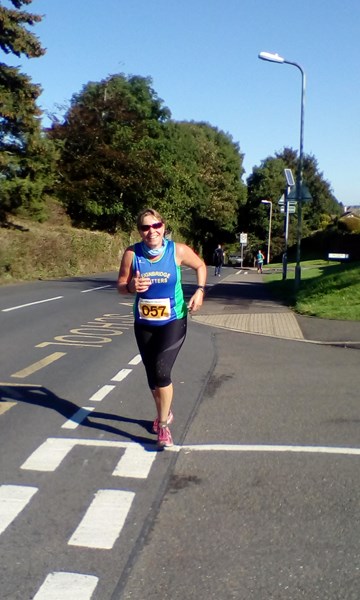 Fizz tackling the hill towards the end of the race 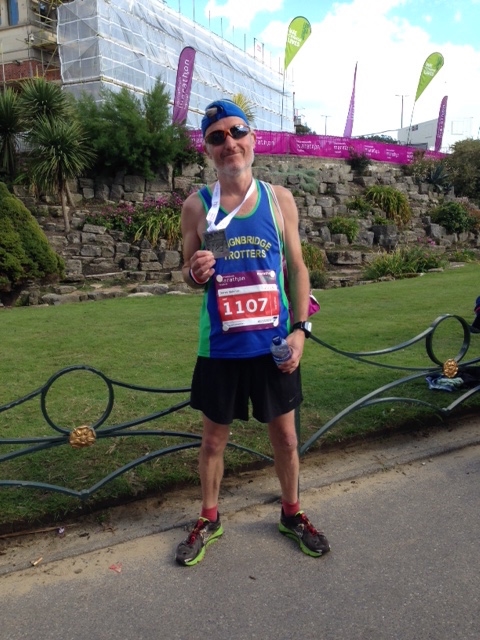 Two Trotters travelled to Bournemouth to take part in the Marathon and Half Marathon.

Thanks a lot for the contributions from Emma Pearcy, Roger Easterbrook, Angela Blakesley and Peter Hayward.