Jamie claims the fastest ever Half ran by a Trotter at Cardiff Half.

Five Teignbridge Trotters travelled to Cardiff to take part in the Cardiff Half Marathon, on Sunday 1st October.  It’s got the atmosphere of a big city event including an elite start, great marshals and good crowd support.  Fortunately, the weather was quite good – better than forecast, anyway – with the rain in the last few miles more refreshing than anything.

The course takes in a lot of the sights in the city, with it starting outside Cardiff Castle going through the streets, along the marina, through Cardiff bay, past the millennium centre, round a lake and finishes by the museum.

Jamie Barnett has been training really well, and following on from his great performance at Bridgwater Half recently, broke the long-standing club record, which has stood since 1996.  Jamie knocked just over 2 minutes off of that, thus claiming the fastest Half Marathon ever ran by a Trotter.  Jamie’s finish time was 1:11:30, for 34th overall

Kevin Woodard claimed a PB too, finishing in 1:19:39, even though he has been carrying an injury.

Lucy Evans and Tracey Jolly ran together, finishing in 2:04:51, resulting in a 17-minute for Tracey.  This is a great improvement from her first run at a Half marathon at this event last year, especially as she was also carrying an injury. Finally, Victoria Ratcliffe ran well to finish in 2:07:39.

Several Trotters took part in one or both days, at the local Plym Trail Marathon over the weekend of 30th Sept/1st October.  The events are excellently organised by firstandlastrunning, and have been come a regular for several Trotters to get one or two marathons under their belts over a weekend.

The course starts and ends at Clearbrook village on the edge of Dartmoor, and for the marathon it is basically two “out and back” legs on the Cycle Route 27; for the Half Marathon, it’s one “out and back”. The course takes the runners across a disused railway line, where they go through a long tunnel, see several bridges and even an old railway platform.  Of course, there were aid stations with goodies to help the runners along the way.

Day 1 was was raining quite bad formost of it, and conditions were soggy and dull, whilst Day 2 saw the rain come for the first couple of hours or so, before easing off, although it was quite humid for the time of year.

For day 2, Marathon results were:

Lance Mason was official pace maker for the Robin Hood marathon (Nottingham) on Sunday 24th September, sponsored by Muzuno. A changed course from past couple of years with a few hills thrown in 1st 6/7 mile , although nothing too bad, but it was very warm conditions.

Keith Anderson is on report duties next weekend (7th and 8th October), so please email him with any race details:  keithanderson50@gmail.com 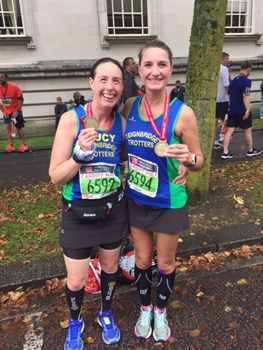 Lucy Evans and Tracey Jolly after Cardiff Half 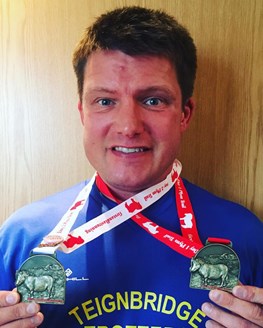 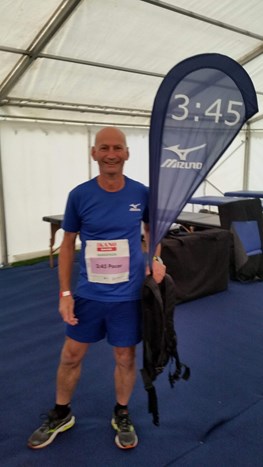