Jim and Emma Donovan and Sue Tremlett were among the 250 runners who skipped through muddy fields, woodland trails, old railway tracks and tunnels on Sunday as part of the Castle Hill Corker.

This multi-terrain race, superbly organised by South Molton Strugglers, had a bit of everything, lots of mud and puddles and an elevation gain of 800ft. The route is around Castle Hill estate, the Palladian home of the Fortescue family who arrived in England with William the Conquerer in 1066 and on a misty mizzly day, the three Trotters set out to conquer the technically tough course.

The race represented excellent value for money. For £12, affiliate athletes had the opportunity to run through privately owned 18th century parkland and all finishers were given a goodie bag packed with treats including an engraved glass Mason jar with handle, honey-based products from nearby Quince Honey Farm, sweets and a banana.

Richard Keatley travelled to ‘Walton on The Thames’ Surrey, to complete his 88th marathon.  It was an 8-lapped route along the river Thames, organised by Phoenix Running.  Richard has completed over 10 of these events now and really enjoys the events.

The weather was really nice and sunny, with the temperature reaching double figures.  This will be Richard’s last Phoenix marathon until after his100th is completed. Richard says that at the moment it’s all about ticking them off, as he has 5 planned for next month.  Richard’s finish time was 5:17:31.

Please note that Keith Anderson is compiling the report next week, so send any information to him - keithanderson50@gmail.com

Also, this is my last report as the club's Press and Publicity officer.  I've enjoyed doing the role, and I hope that the person who takes over at the upcoming AGM enjoys it too. 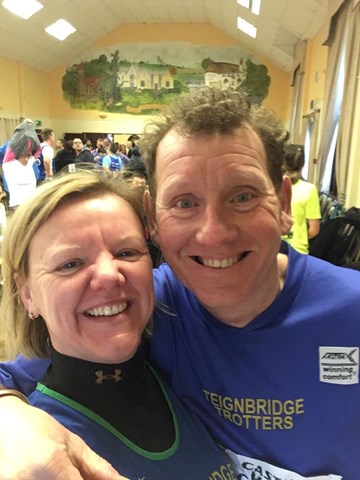